Like champagne, Sharapova's second fermentation bubbles over at French Open 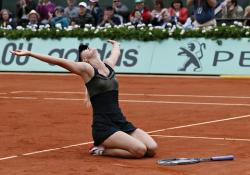 Soon-to-be world number 1 Maria Sharapova underwent her own personal "second fermentation" in Paris during the last two weeks, and as a result, she won the French Open, also attaining a rare career Slam. She is now bubbling over with transcendent cheer, and with good reason--she has earned it.

In 2007, after Sharapova had already won Wimbledon and the U.S. Open, her right shoulder began to trouble her, and she dropped out of the top 5. The Russian star would go on to win the Australian Open in 2008, and she also regained her top ranking, but later that year, Sharapova discovered she had been playing with a misdiagnosed rotator cuff tear. She missed the Olympic Games, the U.S. Open and the WTA Championships.

After a rehab failure, Sharapova underwent surgery to repair her shoulder. She then entered another lengthy rehab, and returned to the court in March of 2009. However, her signature shot--her first and second serves--eluded her. In many ways, Sharapova slowly returned to form, but the serve--once one of the finest in the history of the tour--became a liability. As she struggled with her ball toss, experimenting with different service styles, Sharapova quite visibly lost her confidence.

Eventually, tennis observers concluded that the Russian was still a very fine player, but that she would most likely never achieve the level she had once occupied; in short, that she would never win another major. In 2011, though, it became apparent that Sharapova had never given up, though others had given up on her. With new coach Thomas Hogstedt, she reached the semifinals of the French Open for the first time in her caereer. She then reached the final of Wimbldeon, the home of her first great triumph, but she was stopped by an almost-perfect Petra Kvitova. At the beginning of 2012, she was beaten decisively by Victoria Azarenka in the Australian Open final.

It's important to note that--even when Sharapova was riding the wave of tennis superstardom, with three majors to her name--it was widely believed that she would never win at Roland Garros. Her movement was too awkward, her training had not given her enough comfort with shot variety. These were reasonable criticisms; many a great player has not been able to figure out the red clay of the French Open. But the second fermentation was taking place, and it was fulfilled today when Sharapova defeated Sara Errani 6-3, 6-2 to claim the Coup Suzanne Lenglen. In doing so, the 2nd seed became the tenth woman to achieve a career Slam, and the sixth woman to do so in the Open Era.

Like Francesca Schiavone before her, Errani--who had to achieve almost the impossible to get to the final-- showed up in today's match as the knowing clay court Italian fighter. Only five feet four and a half inches tall, Errani had to face, in Sharapova, what must surely have seemed like a giant. Errani, however, does not have the ability to take control of a match via the net the way Schiavone did. Instead, she had to rely on her accuracy and her comfort in moving on red clay. It was crucial that she move Sharapova up and down, and that she hit the ball as deep to the lines as possible.

Some of the time, Errani did just that, but in the end, she was no match for her opponent. They played in the wind, which might have caused a problem with Sharapova's ball toss, but--for the most part--it didn't. It was the same old WTA story, in fact: If Errani had a decent serve, things might have gone differently.

Errani, who began by making nervous errors, was broken right away, and Sharapova quickly went up 3-0. In the next game, Errani fought from 15-40 to deuce, but was broken again. Finally, in the fifth game of the first set, Errani broke Sharapova, and also hit her first winner. Errani relaxed a bit then, and started mixing some finesse with her groundstrokes, but Sharapova--who did fail to return a drop shot--held for 5-2. The Russian had two set points on Errani's next serve, but the "fighting Italian" part of Errani came out in full force, and she saved them both, holding for 3-5.

When Sharapova served for the set, the fight was on again, with Errani forcing a 30-all scoreline after an 18-shot rally in which she successfully moved Sharapova around and finally wore her down. But Sharapova held, and she began the second set by breaking her opponent. Errani, who had used slice with some success in the first set, discovered that Sharapova was now responding better to low balls.

Sharapova had to work hard in her first service game, when Errani controlled a long crosscourt rally. Another long baseline rally ensued, and this time, Sharapova was unable to get the Errani slice over the net. By this time, the Russian was screaming loudly in a way that sounded pressured. But when all was said, done and screamed, she still held for a 2-0 leave.

Errani didn't give up. She got to 40-0 on her serve by hitting a great lob, followed by two overheads (Errani, of doubles fame, does not miss overheads). She also hit her first double fault, but held. In the next game, Sharapova got what appeared to be a bad line call, giving Errani a break point. Errani then hit a drop shot, which Sharapova scrambled for, and then quickly flicked her wrist to hit a net winner.

There were five deuces in the next game, and Errani hit a beautifully angled skimming volley that appeared to be an instant winner. Sharapova, however, once again got to the net and once again returned successfully. The disappointment on Errani's face said it all. Sharapova then held, and then she broke Errani to reach 5-2. And as if she hadn't put on enough of a show already, the Russian hit a stunning foreland winner to get to championship point. She hit long, though, and then Errani delivered a perfect drop shot that was dying by the time it passed over the net. This time, Sharapova couldn't get the ball back. At deuce, the Russian hit a high forehand to the ad court, and created a another championship point.

But Errani had one more good drop shot in her, and the game went back to deuce. Sharapova then hit an ace, and then won the French Open on her third match point, when Errani hit a return into the net.

Sharapova dropped to her knees, her hands covering her face, but then she lifted her head and reached her hands palms-up to the sky. She looked like the transformed pilgrim that she is. But this was Paris, so Sharapova the pilgrim was wearing a little black dress at her moment of triumph. When she got up, she jumped up and down, and though Ted Robinson on NBC said she was "fighting back emotion," he must have been looking at another match. Sharapova was crying, Sharapova was smiling, Sharapova was the embodiment of emotion; when she climbed into the stands, she even lifted a baby into the air.

The Russian's story wasn't the only great one today, however. Sara Errani, who (with Roberta Vinci) had already won the French Open doubles title, had the most stunning run of anyone in Paris. She took out two former French Open champions, a former French Open finalist, and 10th seed Angelique Kerber, one of the hottest players on the tour. In 2008, Errani won her first WTA tournaments, in Palermo and Potoroz. When she received the Potoroz trophy, she announced: "I want to dedicate this victory to all the Italians who never believed in me as a tennis player, and always said I would never go anywhere." Next week, Errani will enter the top 10 for the first time.

Fighting Italians--you have to love them.

The trophy presentation was charming. Sharapova was introduced as the runner-up, and both she and Errani looked as if they thought they must not have heard it right. Then they both cracked up, and this bit of silliness provided Errani with at least a moment's relief from what was undoubtedly a feeling of immense disappointment. The great Monica Seles then presented  the players the (correct) trophies, and Maria Sharapova lifted the symbol of her victory. That victory spilled over Roland Garros, as the total joy of Sharapova was uncorked. The second fermentation was complete.
Posted by Diane at 2:05 PM

I think my favorite moment of all was when Sharapova lifted the baby into the air, like a scene from "The Lion King. It was hard not to laugh, as I'm sure she will when she sees it played back.

I laughed, but I was also kind of touched by it. It was such a spontaneous 'Pova moment.

So to a good draw and some good players bodies being snatched, Maria has won the French Open. Saying that, I do congradulate her on winning this last major. Hoping when the big "W" starts, the body snatcher is long gone!!!