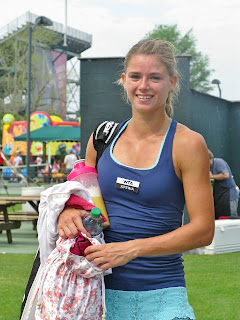 Up a set but down 1-5 in the second set, Camila Giorgi decided to just get on with things. In a display of stylish, hard-hitting, confident tennis, the smooth-moving world number 145 from Italy went about the business of getting a straight-set victory over 20th seed Nadia Petrova. And though this is certainly yet another occasion to say "Oh, Nadia," the fact is that the match was one of high quality; Giorgi just happened to be on fire. She defeated Petrova (who is no slouch as a hitter, herself) 6-3, 7-6, and that included an 8-6 win in the tiebreak.

It was quite a thrilling afternoon, and viewing was difficult. I was also trying to keep up with the match between Maria Kirilenko and Sorana Cirstea--and I was watching Roger Federer fight off what looked like an upset. Just watching was exhausting.

But back to Giorgi. I was quite impressed with the young Italian when I saw her play in Charleston. She had to qualify to get into the Wimbledon main draw, so this was her sixth match of the tournament. In the qualifying rounds, she beat Emily Webley-Smith, Olivia Rogowska and Alexa Glatch. She then took out 16th seed Flavia Pennetta in the first round of the main draw, and followed that with a win over Anna Tatishvili. Now, with her victory over Petrova, Giorgi is into the round of 16.

Who is Camila Giorgi? The 20-year-old was born in Italy and plays for Italy, but lives in France. She's only five feet, six inches tall, and is right-handed. Giorgi says she likes hard courts the best, but her experience this week may change her preference.

Giorgi didn't look tired at all today, but you have to think that she is--at least a bit. She'll need all the mental strength she can muster for the next round, in which she plays 3rd seed Agnieszka Radwanska.

Kim Clijsters advanced today, too, when her opponent, 12th seed Vera Zvonareva, retired in the second set because of a respiratory illness. Zvonareva did hang in for her mixed doubles match, which she and partner Marcelo Melo won.