It's the Italian and The Maria! 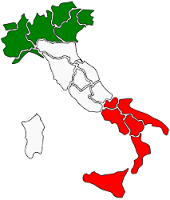 Once again, at the French Open, the boot that is Italy has kicked Sam Stosur in the outback.

In 2010, it was fighting Francesca Schiavone who stunned (a word I don't use much) Stosur in the final; today, it was Sara Errani, who just wouldn't go away, and who read Stosur's anxiety like a book of cautionary tales she might have been given in school in Bologna. Stosur didn't let Errani overtake her the way she had let Schiavone, but the Australian star just couldn't stop making unforced errors; she made a total of 48, in fact. Stosur also hit 46 winners, and that sounds like a decent--if not great--ratio, but her opponent was steady and careful, and retrieved tirelessly.

Each player hit to the opponent's backhand as much as possible, and each showed strength with her forehand. The first set was closely contested, with Errani coming through for a 7-5 win. In the second set, though, the Italian player was barely able to get a foot in, with Stosur making the most of a deadly second serve. Stosur won that set 6-1, and--according to the usual WTA storyline--Errani was supposed to fade away, while Stosur dominated in the third set.

But it didn't happen like that. Instead, Errani quickly went up 3-0 in the final set. The set went to 4-all, but then Errani--in a show of strength that will probably haunt Stosur for a while--won 12 of the last 15 points, took the set 6-3, and advanced to the final of the French Open.

But there's more. Errani, with partner Roberta Vinci, is also in the doubles final. And, with her win over Stosur, she has also entered the WTA's top 10. Wow. Errani has already won three clay tournaments this season--in Acapulco, Barcelona and Budapest, making her the biggest winner on red clay in 2012. But even before her clay streak began, Errani showed the world how tough she is when she reached the quarterfinals of the Australian Open.

Errani's opponent in the final will be Maria Sharapova, or The Maria, as I'm sure Petra Kvitova (who has told us all about "The Serena" and "The Pink") would call her. The Maria was on her game today, and Kvitova--once again--was way off hers. The Wimbledon champion, in fact, sometimes looked as though she didn't even realize she was in a major semifinal. She was uncertain, sluggish and lacking in both style and aggression. And so we continue to ask: "What's wrong with Petra?"

Sharapova's victory marks a huge turning point for her. She is now number 1 in the world, a position she hasn't occupied in a while. She is in her third final in four consecutive majors, after many said she could no longer be competitive at the top level. After a misdiagnosis, major shoulder surgery and the re-do of rehab, Sharapova had all kinds of problems with her serve and with her confidence. She made it to the 2011 Wimbledon final, but was beaten by Kvitova. She made it to the 2012 Australian Open final, and was beaten by Victoria Azarenka. Now she enters the final of the major that many said she could never win, even before she had her shoulder injury.

Sara Errani did some heavy lifting to get to the last round. Here are the finalists' paths to the championship round:

I hope she recognizes how good she is so that she doesn't have a fall-off after the FO. Everyone will be gunning for her for a "good win".

Well, she reached the quarterfinals of the Australian Open, so there hasn't been a fall-off yet.

The Maria wasn't in the U.S.Open final in 2011. Or am I misreading that three of four consecutive finals line?

The Wimbledon champion, in fact, sometimes looked as though she didn't even realize she was in a major semifinal. She was uncertain, sluggish and lacking in both style and aggression. And so we continue to ask: "What's wrong with Petra?"

Perfect! What IS wrong? I'm beginning to speculate. I just watched Kvitova v Kanepi at Wimbledon 2010. None of that level of focus has been evident even during the French Open matches that Petra won.

There's a picture that I'd like to mail to you that has mystified me for some time. I do not want to post it.
May I send it and my query about it? It may hold a clue to the answer to your question. It may be a dead end too. I just don't know.

I'm repeating myself, but must say that Diane's sentence, "The Wimbledon champion, in fact, sometimes looked as though she didn't even realize she was in a major semifinal," resonates strongly. I've seen her lose before but never have I seen such a passive countenance for so much of a match. Maybe something is amiss in her off-court life.