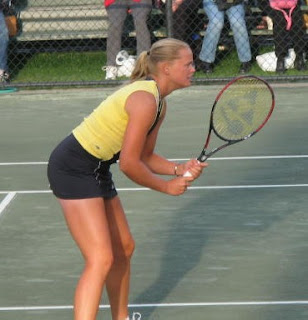 Dinara Safina did what she had to do today at the U.S. Open, and--breaking her pattern of providing non-stop three-set thrills--did it in straight sets.--7-5, 6-0. But even though Anna-Lena Groenefeld's U.S. Open run has ended in the round of 16, her comeback is significant news for the Sony Ericsson WTA Tour.

Groenefeld reached her career-high ranking of 14 in 2006, but then faced some personal problems which led to her fading away. She played challengers to get herself back on the tour, and I don't think there is any doubt that she is now officially back. In the course of the U.S. Open, she took out both Daniela Hantuchova and Alize Cornet, and she hit a 128 mph serve.

well, I'm sad but still happy with her tournament...it was just so nice to see her happy and playing well again.

By the way, our broadcasters were kind enough to show the very last game of the match, and that was it.