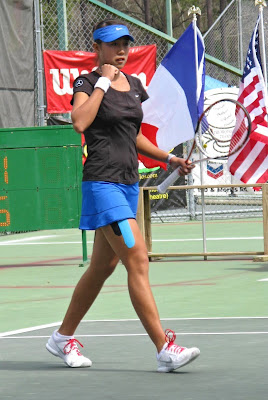 Zhang Shuai, seeded 3rd, won the Tangipahoa Tourism/Loeb Law Firm 25k Tennis Classic in Hammond, Louisiana today, easily defeating Jamie Hampton, who was a different player today than she had been earlier in the week. Hampton's first serve, which has been a strength in this tournament, was off the mark in the final, and she made too many unforced errors to make the match as competitive as it could have been.

The match was somewhat of a letdown in more ways than one. The tournament director introduced Zhang as "Ching Chang," and--though he tried to make up for this gaffe at the awards presentation--he didn't do much better the second time.

Conditions were good today--pleasant temperatures and very little wind. Zhang went up 3-0 right away, with Hampton winning just a few games because she was making unforced errors. Serving at 1-4, deuce, Hampton held with the help of two high-kicking second serves. Zhang won the seventh game after Hampton rushed the net and the 3rd seed was able to get a backhand down the line past her. Zhang took the first set 6-2.

Hampton broke Zhang immediately when the second set began, and I probably wasn't the only one who thought we were going to get a competitive set. But Zhang broke her right back when Hampton once again had problems with her serve. The unforced errors continued to come off of Hampton's racquet, and Zhang won the second set 6-1.

Then an odd thing happened. Zhang shook hands with Hampton and then just sat down and put away her racquet; she never raised it so that she could hear the applause from the crowd. That wasn't the only strange thing about the end of the match. Hampton and Zhang were given their checks, each of them said a few words, and the ballboy holding Zhang's trophy was never asked to give it to her. He just stood there with it, and finally, he put it down. So there was no holding the trophy and hearing the applause from the crowd, either.

Zhang was kind enough to spend a little time with me after the match. I asked her what the hardest part of getting to the final and winning was, and she said that--in the last four matches--it was getting herself together and remaining calm, no matter what.

Zhang said she had hoped to go to Indian Wells, but she didn't get in, so she is going to the $25k tournament in Clearwater, Florida, after which she will play in the 25k tournament in Fort Walton Beach, Florida. And after that, Zhang heads to Miami. Her goal for the year, she said, is to get into the top 100. She is currently ranked number 145 in the world.

Finally, I asked today's champion which of her shots is her favorite, and she answered, "All of them!"
Posted by Diane at 5:12 PM

Solid, intelligent, astute nationalistic player. No sense picking up a trophy when her name was mispronounced twice.
She is now #78 ranked in WTA.
Impressed by a picture of of her giving a clinic for young tennis player at 2011 BMW Malaysia Open.
She will go far and is a worthy successor to Li Na