An interview with Heather Watson 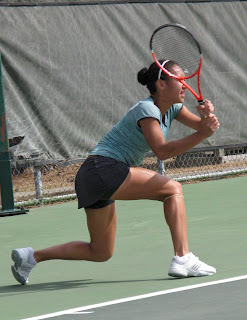 Recently, in Hammond, Louisiana, at the Tangipahoa/Loeb Law Firm $25k Tennis Classic, I had a chance to meet Heather Watson. The 2009 junior girls U.S. Open champion got off to a roaring start in Hammond when she defeated former world number 7 Nicole Vaidisova in a very long match that was played in extremely windy conditions. In the quarterfinals, however, the young British star lost to eventual champion Zhang Shuai.

Heather was kind enough to answer a few questions from Women Who Serve:

It was nice to see so many British players in Hammond. We did our best to give you some crazy weather :) You looked like you were handling all that wind pretty well. Do you have experience playing in a lot of wind?

Well, wind is the same for both players so you can never make any excuses. I have played in the wind quite a bit, but I wouldn't say that I'm experienced...haha.

What do you think happened against Zhang in the quarterfinals? You looked kind of frustrated in the second set.

I had my chances in the first set but wasn't able to covert, and as the match went on I got more frustrated, but she played very well and I shouldn't have let that bother me.

I am in Mexico at the moment playing another 25k. I'm not sure if I will be playing the French Open this year but I will hopefully be playing Wimbledon. I will come home early for the grass season to prepare.

Has winning the junior girls U.S. Open changed your life in any way?

It definitely has. It made me decide to turn pro instead of going to college which was one of the biggest decisions I have had to make in my life so far. It made me believe in my ability and what I can do on the court. 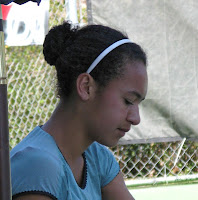 You're known for your footwork, court savvy and serve. What do you think you need to work on the most in order to advance in your senior career?

I think I need to keep working hard and keep getting fitter and stronger. I definitely have a lot to improve, and that's the exciting part.

My goal is to climb the women's rankings as quickly as possible and keep improving as a player and a person. I want to gain experience and learn from being on the tour.

Does anyone besides your coach travel with you?

I travel with my mum to almost every tournament, but she takes a break every now and again, like in Hammond I was just with my coach.

What subjects do you enjoy the most in school, and--if you weren't a pro tennis player--where would we most likely see you?

Art is definitely my favourite subject by far!! No other subject compares to it for me. And I have no idea, but probably on the beach :) because I love it!
Posted by Diane at 12:48 AM