Zhang and Hampton to play in Hammond 25k final 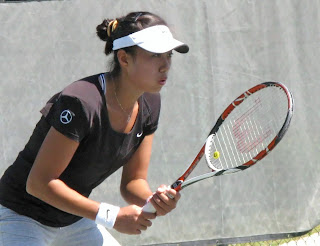 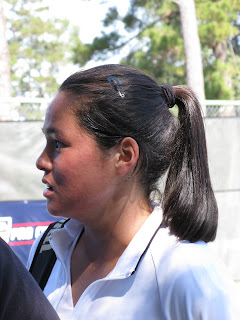 Jamie Hampton advanced to the final when Kurumi Nara retired because of illness
Zhang Shuai and Jamie Hampton will compete tomorrow for the championship of the 2010 25k challenger tournament in Hammond, Louisiana. Their playing styles are different, and their semifinal paths to the final were dramatically different.

Zhang, the 3rd seed, played her semifinal against the unseeded Xu Yi-Fan, who--with partner Zhou Yi-Maio--also won the doubles championship today. Xu, who plays left-handed, dominated in the first set, which she won 6-2, after going up 4-0. And, while the set was better than the scoreline indicates, Zhang took the second set 6-0. Xu made a number of unforced errors and lost most of the long rallies. Then the two players got down to business, and produced one of the best sets of tennis I've seen this year.

From the beginning of the set, it was obvious that both players had raised their levels, with Xu rushing the net from time to time, and hitting some good lobs. At 3-all, Xu was down 0-40, but brought the game to deuce. Zhang saved a game point with a forehand down the line, and went on to break Xu, but Xu broke her right back. It was during this game that the umpire called a ball in that was out, and Zhang became agitated and had trouble letting go of the issue.

Zhang will play Jamie Hampton in the final tomorrow. Hampton, who is unseeded, played 6th seed Kurumi Nara in the semifinals. During the first set, Nara--an especially good court mover-- was moving poorly, and simply did not look right. Hampton took the set easily, at 6-1, and 1-1 in the second set, Nara retired. She had become ill last night and tried to play through the illness, but she felt too sick to continue. This was a real letdown, not only to Nara, but to those of us who were watching.
Posted by Diane at 9:12 PM