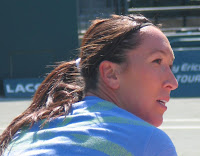 What began in Indian Wells this evening as a near-meltdown for 6th seed Jelena Jankovic ultimately became an eminently watchable thriller, as Jankovic's spirit slowly lifted and we began to see more and more of what one of the Tennis Channel commentators (and some of the rest of us) refer to as the "old Jankovic."

Jankovic was up against savvy clay court specialist Sara Errani, who is perhaps the ultimate grinder on the women's tour. Errani was in fine form in this third round match, and impressed the crowd with her defensive play, which--like the "old Jankovic"--she was often able to turn into offensive success. Errani spun, sliced, lobbed, and hit precise groundstrokes, frustrating a flat-looking (how often have we said that in the past year?) Jankovic. Gone was the old-time smile on JJ's face, and gone was the breath-taking backhand down the line. Errani expertly took the first set 6-2.

In the second set, it was as though Jankovic woke up. Her errors decreased, and she found a rhythm. But that didn't stop Errani, who kept up with Jankovic and took the set to a tiebreak. That's when it got really interesting: Jankovic quickly went up 5-1, but Errani saved set points to even the score, securing the last one with a perfect drop shot. It then went to 6-all, and finally, Jankovic was able to take advantage of a set point.

Jankovic began the third set on a positive note, but Errani was not to be stopped. Suddenly, the 6th seed was serving at 2-4, 0-40, and that's when the "old Jankovic" made her greatest appearance. She saved three break points, but could not win the game on her first ad point. She did save a fourth break point, however, and on her second ad point, she held with a strong serve. It was all pretty much about JJ after that, though her opponent never stopped fighting. A disgusted Errani missed an overhead on match point, and Jankovic took the set 6-4. It took her almost two hours and 49 minutes, but the 6th seed won her ticket to the next round.
Posted by Diane at 10:58 PM

I didn't see the entire Errani-Jankovic match but the bits that I DID see were entertaining. Never seen Errani play before but I'll be sure to catch her in the future. Good to see Jankovic pull out the win, it's been upset city in Indian Wells this week.

Everyone is losing in California, but JJ is still standing.

With chaos all around her... let Chaos reign? It would be fitting. :)

Todd, that's exactly what I was thinking. Leave it to JJ.

Mel, Errani is a fine player who can stay out there for hours, if need be. Grinder that she is, though, she also knows her way around the net. I am interested in how far she can go. And as much as I wanted JJ to win last night, I did feel bad for Sara when she missed that last overhead.

I know...it was a shame the match ended as it did. Hopefully this will be start of better things for JJ.