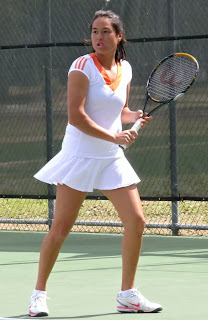 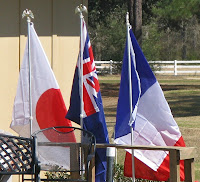 Naomi Broady brought more drama to the court today in her quarterfinal match against Jamie Hampton in Hammond, Louisiana. There were not many people watching the match, but the crowd included Hampton's coach and a woman I presume was her mother. They cheered for Hampton after almost every shot she made, which irritated Broady to the point that she asked the umpire if it was "necessary" that Hampton's supporters "say something after every shot." The umpire quickly pointed out that Hampton's small entourage had not said anything inappropriate ("Nice shot, Jamie!" was the extent of it), and that there was nothing wrong with their cheering for her.

This interruption occurred in the middle of the last game of the first set, which Hampton won, 6-1. Hampton served very well, hit some good passing shots, and--most important--was aggressive from the moment she stepped onto the court. Every chance she had, she went forward, handling Broady's estimable backhand, and either smashing the ball or passing Broady.

Broady went up a quick break in the second, and I settled in for what I thought could be a three-set match. But Hampton never let up on the pressure, hitting a succession of drive volleys on the run, and generally breaking down Broady's game. She had plenty of help from her opponent. After Broady missed a ball that was nicely placed by Hampton, Hampton's supporters again cheered for her. Broady, obviously upset, told the umpire "It's unnecessary and unsportsman."