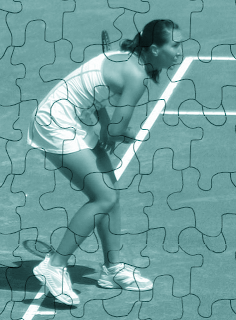 For many months, some of us have been asking "When is she coming back?" Jelena Jankovic answered that question this week in Indian in Indian Wells. Today, decked out in her oh-so-JJ lime tennis dress, she answered it emphatically. The 6th seed, who had not won a title since last fall, came out blazing today in her final against 2nd seed Caroline Wozniacki. She went up 3-0 in the first set, and looked like he might go up 4-0, but Wozniacki then held serve.

Jankovic, serving well enough, and putting on a clinical display of the defensive play for which she is known, took the first set 6-2. She immediately went up a break in the second set, too, but in that set, Wozniacki began to hit the ball with more precision. But Jankovic won that set 6-4, and thereby claimed one of the biggest titles in pro tennis.

Jankovic's movement was as good as it has ever been, she spent more time at the net than usual, took the ball very quickly, and repeatedly attacked Wozniacki's forehand. The precision of Jankovic's groundstrokes was, in fact, too much for Wozniacki to handle.

Jankovic has not had an easy time of it the last year and a half. She came back from the off-season in 2009 very bulked up, and said that the additional weight inhibited her movement. She changed her training regimen and dropped the weight, but then her mother became quite ill. Snezana recovered, then JJ's grandmother died. Jankovic did win a couple of titles, but both last year and at the beginning of this season, she just didn't look like herself--something was missing. Then she traveled to the California desert and found those missing pieces. Confidence is a fragile entity, and one which Jankovic now obviously has back in her possession.
Posted by Diane at 6:35 PM