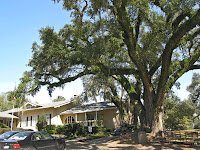 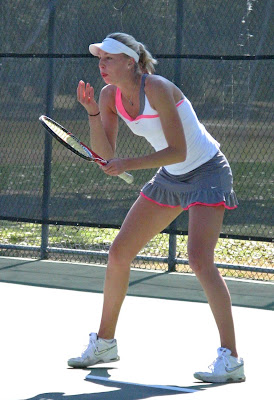 I spent part of the day at the Tangipahoa Tourism/Loeb Law Firm $25K Tennis Classic in Hammond, Louisiana today. We have had tropical storm-strength winds around here lately, as well as rain, so conditions have been tough for the players. Today was crisp and cold and very sunny, with intermittent--but not high--wind blowing on the courts.

I watched a really high quality 2nd round match between qualifier Naomi Broady and wild card Kimberly Couts. This match had a bit of everything, including some drama. At one point in the second set, Broady was so upset by the chair umpire's line calls (the chair umpire was in charge of calling the baseline and the service line) that she questioned whether her opponent was being given preferential treatment because she was American. The tournament supervisor came to the court and had a chat with both the chair umpire and Broady, and that appeared to settle things. In the second half of the match, however, it was Couts who argued continually with the chair umpire.

What everyone around me was talking about, though, was Broady's backhand, and with good reason. It's a one-hander, but it isn't "artistic," a la Henin or Mauresmo or Schiavone. Broady puts a very big burst of energy into the stroke, which she snaps, and it then cracks across the court with power and precision. If you saw the ball without seeing the stroke, you would assume it was delivered by a powerful two-handed backhand.

Broady won the first set, 6-3, and Couts--who played a very good match--won the second, 2-6. Broady went up 4-0 in the third, but Couts came back to make it 4-all. Broady broke again, though, then won the set (and the match) 6-4. I liked the authority she displayed when she served for the match. There was no messing around; indeed, there were two aces. Broady has a strong serve, and her preparation is reminiscent of Sharapova's.

i absolutely enjoy your own writing way, very interesting.
don't give up and also keep creating for the simple reason that it just simply truly worth to read it,
excited to browse additional of your own content articles, have a good one :)

I only just saw this--thanks, Anon.