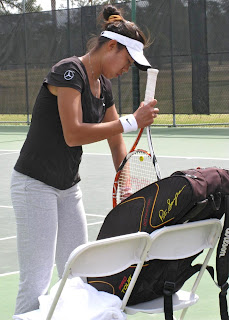 A calm and serious Zhang Shuai packs her racquet after defeating Heather Watson in straight sets
I returned to Hammond today, to the Tangipahoa Tourism/Loeb Law Firm $25K Tennis Classic, to watch some of the quarterfinal matches. One I was quite interested in was the match between 3rd seed Zhang Shuai and Heather Watson. Zhang, of course, has some fame for having defeated then-number 1 Dinara Safina in the third round of the 2009 China Open. Watson was the winner of the 2009 U.S. Open junior girls championship.

Watson went up a break right away, and proceeded to change the direction and the pace of the ball so successfully, she soon had a 5-1 lead. But then Zhang picked up her game and began passing Watson all over the place; she eventually broke Watson at love to bring the score to 5-all.

Toward the end of the first set, the wind picked up again, which didn't appear to bother either player. Zhang quickly went up 3-0. When Zhang served at 3-1, 30-15, Watson could see the match slipping away from her, and--though nothing extraordinary had occurred at that moment--she smacked her racquet a couple of times on the court. She then saved a game point with her own passing shot, and earned an ad point by drawing Zhang to the net and passing her again. Watson broke Zhang, and there was every reason to believe we were about to experience a momentum shift, but Zhang broke her right back. Down 2-5 and ever the Brit, Watson muttered "Just give up, Heather, really...."

Zhang finished the match with a 7-5, 6-2 score, and earned a spot in the semifinals, in which she will play Xu Yi-Fan, who won her quarterfinal when her opponent, 8th seed Stephanie Foretz, retired at 7-6, 1-3. I wasn't near the court when the retirement took place, so I don't know what the injury or illness was.

Another match of which I saw only a small portion was the quarterfinal between 6th seed Kurumi Nara and Zhou Yi-Miao, which Nara won, 6-1, 6-1. Nara will play Jamie Hampton in the semifinals.

All the Brits went out in doubles semifinal action today. Melanie South and Georgie Stoop lost to Xu Yi-Fan and Zhou Yi-Miao, and Naomi Broady and Heather Watson lost to Christina Fusano and Courtney Nagle.
Posted by Diane at 5:59 PM