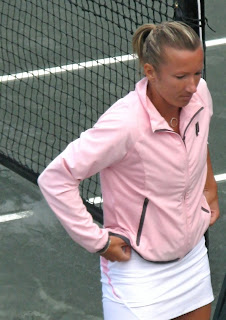 In this evening's BNP Paribas Open doubles championship, each player made some good shots, and there were several momentum swings, but there was no doubting who the star of the championship was. Kveta Peschke, known in doubles circles for her stinging forehand, also controlled the court with a very formidable backhand. And as if that weren't enough, Peschke's volleys were superior. As the match went on, it was Peschke's game that got better, and she and partner Katarina Srebotnik--an unseeded team--defeated 3rd seeds Nadia Petrova and Samantha Stosur 6-4, 2-6, 10-5.

Srebotnik, of course, has only recently returned to the tour, but she and Peschke have already shown that they are a force with which to be reckoned.
Posted by Diane at 9:32 PM