Nicole Vaidisova has retired from professional tennis. The 20-year-old from the Czech Republic, who, at one time, was known for her on-court temper tantrums, fell down the rankings some time ago. Despite playing in challengers and occasional qualifying rounds and main-draw first rounds, the once-heralded Vaidisova was not able to regain her former place in the pro tennis heirarchy. Indeed, she was not able to gain any place at all. 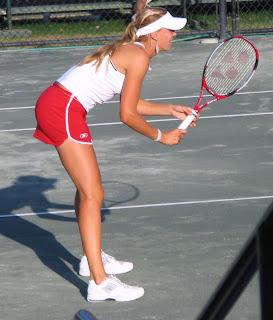 Last year, an associate of the Czech player's told the press it was her firm belief that Vaidisova simply had no competitive drive at all. I accepted this statement as the most likely explanation for Vaidisova's fall from the top. Hailed as prodigy, she had considerable talent, but a fragile mentality.

For a few years, it looked as though Nicole Vaidisova was on her way to being a truly big name in women's tennis, but it just didn't happen for her. Of course, given her age and the popularity of comebacks, we could certainly see her again.

Vaidisova turns 21 next month. In July, she will marry ATP star Radek Stepanek.
Posted by Diane at 6:05 PM

I am very sad about this but from what Clijsters said in her press conference it was not the mental part of her game that made Vaidisova seem like a mental case. Clijsters says that she seemed to be under a lot of pressure to perform. In addition, I have read elsewhere that there was pressure placed on her by her family to play tennis and as such when she got to the stage where she could make her own decisions she did. Sometimes I think there is much more to the story than we are getting. She was being coached by her stepfather and I cannot recall ever seeing her mother in the picture, although she must have been there. I think her hooking up with Radek was more of a looking for someone to take care of her rather than a romantic attachment. The fact that it has developed into a romance and now wedding speaks for itself. I have no doubt that Nicole may reconsider and come back to the tour when she is mentally capable, i.e. she has figured out exactly what she wants out of life. Perhaps she may decide that tennis is just not what she wants and I doubt that being married and barefoot and travelling the world as Radek's wife is really what she wants. As a psychologist Diane, how do you see this?

I am in the process of reading Andre Agassi "Open", it doesn't surprise me at all that she is quiting, another NB prodigy hating tennis...

I really don't know, Karen, but I think that Nicole is very young, and there is, as you say, more to this than meets the eye. Her stepfather was very anxious when she played (which is certainly better than some of the parent reactions we see); I recall that.

When I think of "too much pressure," my mind always goes to Kournikova. She was quite talented, and she was pushed and pushed by her mother. I have always wondered about that one.

Stepanek screwed that up