Windy and clear, but no Sunshine 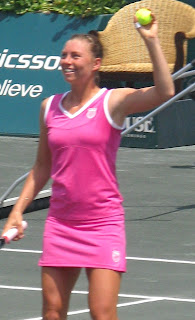 Vera Zvonareva had to use five racquets in her semifinal match against top seed Caroline Wozniacki at the U.S. Open this afternoon. The 7th-seeded Russian broke her racquet strings four times, but it didn't distract her from breaking Wozniacki four times, also. Maintaining a high level of aggression and again handling the wind with patience and precision, Zvonareva used her strong serve to stop the 1st seed's campaign to win a major title.

At 2-1, 40-30 in the second set, Zvonareva used poor judgment in hitting a volley, and Wozniacki broke her on her first break point. This might have been a turning point in the set, but Zvonareva immediately broke her back at 15.

Zvonareva won points on 70% of her first serves, and she hit five aces. She was also successful at the net 76% of the time.

This is Zvonareva's second trip to a major final. Her first occurred earlier this summer, when she reached the finals at Wimbledon, where she was defeated by Serena Williams.
Posted by Diane at 3:38 PM

I like both players but it is good to see Zvonareva healthy and not letting the wind or racquet situations give her a breakdown. It was suggested by MJ Fernandez (I think) that her meltdowns may have often had to do with the frustration of many injuries over time. Being fit and more mature hopefully we will continue to see a Zvonareva whose game is fun to watch. She was patient, adapted to the wind, hitting shots with less margin of error, getting balls back and keeping her eye on the prize.
I am sorry for Wozniacki. I hope she doesn't take this as hard as she took her first break in the match. She is young and can help herself by putting some more aggressive shot-making into her game. THe only thing that bothers me is if the loss had anything to do with pressure. With Safina, Jankovic and Ivanovic going the way they did, I would hate to see another young player who is close to the top and a major lost under the heap of pressure.

I think the loss had a lot to do with pressure, but it also had to do with Zvonareva's service game, which was just too good. She was dictating just about everything.

I'm thrilled for Vera, who has worked so hard for so long, and has had some of the worst luck imaginable.

Congrats to Zvonareva! Knew she could do it, now win the title!

I agree about Zvonareva's service game. Seemed like every serve was deep with pace, and she kept Wosniacki on her heels. Should be a good final.