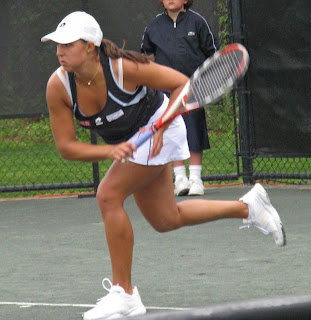 Bethanie Mattek-Sands led qualifier Tamira Paszek throughout the first set in their Quebec City final today. Paszek forced a tiebreak, however, in which Mattek-Sands held two set points. Paszek, however, went on to win the tiebreak. Mattek-Sands took the second set, 6-2, and went up an early break in the third. Paszek eventually went up 6-5, and broke Mattek-Sands when she served to stay in the match. The match lasted over 2 hours and 47 minutes, so spectators were treated to a lot of tennis.

This is Tamira Paszek's second WTA title. Once considered a star on the rise, Paszek has had to contend with many odd twists and turns--all of which have been troublesome--in her brief career. She is currently ranked number 151 in the world.
Posted by Diane at 4:33 PM