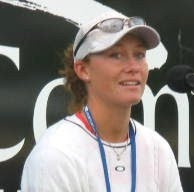 To a great extent, fans of women's tennis could predict what would happen in last night's very late round of 16 match on Arthur Ashe Stadium at the U.S. Open: 12th seed Elena Dementieva would make 5th seed Sam Stosur's forehand suddenly look not so threatening, Stosur would become passive for part of the match, and--at some point--Dementieva would have some sort of mental collapse. What we couldn't predict was the order in which those things occurred.

This match had so much drama, and so many twists and turns, one could probably write a novella-sized text about it. Suffice it to say that Dementieva's returns did indeed neutralize many of Stosur's forehand shots, Stosur played several games without exhibiting any aggression, and--at the very end--Dementieva came unglued.

Stosur took the first set fairly easily because her serve was working so well for her. But it began to fail her, as it does from time to time, in the second set, (how many times will commentators continue to say "This is the first time I've ever seen Stosur's serve fail her"?), and she also made a stream of unforced errors. Dementieva was quick to take advantage of Stosur's service problems, took the second set, and--breaking her opponent five times in a row--went up 3-0 in the third set.

At this point, Stosur appeared locked to the baseline, not moving forward to put any pressure on Dementieva. But slowly, she came out of her passive mode, and broke back for a 3-all score, and then the real thrills began. Stosur began relying almost exclusively on her kick serve. Dementieva broke again, and held a match point when she served for the match at 5-3. Stosur saved that match point, but then quickly went down in her own service game, handing the 12th seed three more match points, all of which she failed to convert. Stosur then held a match point on her own serve, which Dementieva saved.

By this time, it was very late, and the crowd was completely enthralled with the over-the-top effort made by both women in their attempts to escape losing the match. It seemed only appropriate that the entire battle of nerves, athleticism and tennis savvy would wind up in a tiebreak. But it was at that point that Dementieva's focus broke down, and her winning forehand broke down with her. Stosur swept the tiebreak 7-2, handing Dementieva what had to be an extraordinarily disappointing loss, 6-3, 2-6, 7-6. (Stosur's point total for the match was 106, Dementieva's was 107.)

Stosur's comeback was noteworthy. Down 0-3, down 3-5, and facing four match points, she prevailed.