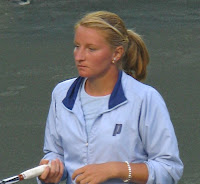 The doubles title was won by Alexandra Panova and Tatiana Poutchek, who defeated Alexandra Dulgheru and Magdalena Rybarikova 6-3, 6-4.
Posted by Diane at 10:55 AM