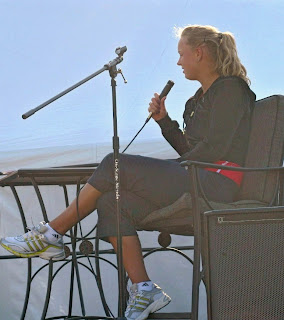 Nadia Petrova said that if she hadn't thrown her back out early in the third set of her New Haven final against top seed Caroline Wozniacki, she might have been able to launch a serious challenge to take the title. Perhaps. The back injury certainly didn't help, but throughout the match, Petrova exhibited the frustrating streakiness for which she is known.

Petrova managed to hit twelve aces--four of them in one game (I haven't seen anyone do that since Lindsay Davenport did it several years ago), but she, like her opponent, had problems serving into the bright sun. Petrova repeatedly set up sure-thing winning shots, but failed to execute them by hitting the ball long. Wozniacki won the first set 6-3, but in the second, Petrova--looking a lot like Thrill Ride did before her injury--broke Wozniacki three times to win that set 6-3. She did it the hard way--working around her own errors--but her opponent was making more errors, too.

Wozniacki went up 2-0 in the third set, and Petrova called for a trainer because of an obvious back injury. She then went down 1-3, but broke Wozniacki to get back on serve. She then had significant difficulties with her serve, and was broken at love. Wozniacki took the set 6-3, and thereby won the New Haven tournament three times in a row. This is her fourth title this year, and her tenth career title.

Kim Clijsters placed second in U.S. Open series points, and Svetlana Kuznetsova placed third. They, too, are eligible for bonuses.
Posted by Diane at 6:34 PM

That was a really horrible match by Petrova. Not my favourite player. Too much headcaseyness. I can never understand why a player with so many weapons always seems to fall apart when it matters most. Not sure that her injury contributed to it as Wozniacki was playing her usual one more ball style of play.

I have to give it to Wozniacki though, she is certainly as tough as they come but against the really good players, and the ones who will not give her a chance to get into these long cross court rallies, she will pay. I am sure that a player like Sharapova will not let her get away with playing like that.

Petrova, Kuznetsova, Dementieva: They all have the same issues. I actually enjoy Petrova (well, I enjoy them all), but she has blown so many opportunities in her career. This match, was--unfortunately--a typical kind of Petrova performance.

She got it together in the spring of 2006, but then she was injured and the cycle started again.

Not sure if you were listening to the CBS broadcast of this final but man, I am not Carillo's biggest fan, but I hope the WTA honchos were listening to her today. You know when Carillo gets onto something it is like having ticks on a dog. She never lets up. Today and for the last couple of weeks it has been her dislike for on court coaching. Today, she let everyone have it.

The best one: these women are multi millionaires and you need daddy to come down and tell you to do something that as a professional athlete you should do.

She then went on to say that you would never see Venus and Serena doing this and she went even further. Neither Richard or Oracene would deign to come down courtside to talk to either of them. I remember when it just started as a lark Serena designated Venus as her on court coach and they spent more time laughing and talking rather than doing any coaching.

Two days ago I saw Venus give a Ralph Lauren Legends clinic and this woman knows tennis. Inside and outside. She has a brilliant tennis mind and I really think that if more players knew the Xs and Os of the game then there would definitely be no need for on court coaching.

Mary said today why could not Petrova have figured out that she needed to step in on her opponent's second serve and start ripping the returns. Why did she need a coach to come down courtside and tell her this? Very good point and neither of the men in the booth had a response.

She said on court coaching made the women look weak and ineffective. I wanted to reach through the TV and give her a hug and a kiss.

I heard it, and I felt exactly as you did.

I still don't know what to make of Wozniacki. There's no denying her talent and consistency, but it surprises me that she still hasn't delivered consistently in the slams. Yes, she got to the US Open final last year but besides that she's only made one other quarter final. I think she will do well over the next fortnight, but I would be surprised if she won the whole thing. I think and hope that Maria Sharapova will be the champion in two weeks time.

BS, Wozniacki's lack of consistency at the majors can be summed up best in this phrase: on court coaching. Last year she got incredibly lucky when she did not have to face any tough opponents as Oudin did her a favour by taking them out. This year, she has performed very well in the lead up tournaments but fizzled and burned at the Grand Slam stage.

Wozniacki can hardly think her way out of 6-0-, 5-0 - 40-0 up in a match without having her father come down courtside to point out the dimensions of the court to her. If she wins a major I will be truly amazed by it.

There is a reason why she has not had success against players who hit big and who can blow her off the court. The ones against whom she has a good record, i.e. big hitters, are the ones who have no idea how to get out of their own way in order to win a match.

Going back to Petrova: The irritating thing is that she does know she has to step in for a second serve. She is, historically, an excellent tactical player, and anyway, any pro player can figure that out. This is what I think--that on-court coaching promotes learned helplessness.

I also think that such learned helplessness is related to a culture of women's shaky self-belief, but I don't need to get into all that. You know what I mean.

TennisAce, I completely agree with you. The on-court coaching had totally slipped my mind. I remember earlier this year in Wozniacki's match against Petrova (in either Miami or Indian Wells) she called her father down at 5-0 in the final set. It was ridiculous, because surely she didn't need his help at that stage in the match.

Diane, you mentioned Dementieva, Kuznetsova and Petrova having the same issues, I would put Zvonareva in the same category. So much talent between them that unfortunately has not been fulfilled.

I also fogot about Safina! All the top Russians (except for Sharapova) have had these issues.