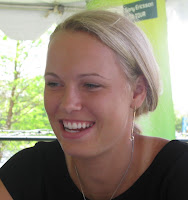 2nd seed Caroline Wozniacki won the Rogers Cup today. Because of the constant rain in Montreal, Wozniacki had to play her semifinal match this morning, and then play the final this afternoon. She easily defeated a rather flat 11th seed, Svetlana Kuznetsova, 6-2, 6-3 in the semifinals.

8th seed Vera Zvonareva won her semifinal match 7-6, 1-0 when 10th seed Victoria Azarenka retired because of a left foot blister. When Azarenka retired, all I knew was that she had a problem with her foot, and I thought "Oh, no--there goes another ankle." But a blister, though most unfortunate for Azarenka, is something that will heal in plenty of time for the U.S. Open.

In the final, Wozniacki defeated Zvonareva 6-3, 6-2. Wozniacki now heads to New Haven, where she is the defending champion. Lucky for her, that tournament is running behind because of rain, also.
Posted by Diane at 3:19 PM

I watched the match and I have to say that apart from Vera not turning up to play, Caroline played a strategically sound match. She had her tactics down right and she stuck to her game plan.

One thing that really struck me while I was watching this match was how strong this young woman is under pressure. 3 break points at 5-3 and what does she do. She channels her inner Serena and fires down some huge serves to hold for the set.

She was very strong on the break points today and she played sensible safe tennis. I do not know whether that will take her to a Grand Slam title, but it cannot hurt. Against the players who are willing to take risks though she is going to be in deep trouble. Those balls that Vera was afraid to come in behind people like Serena and Venus and Sharapova will just swat them away.

Vera really needs to get out of her own way and play tennis. She spends too much time berating herself (even when she is not doing it for all the world to see) but you can sense that it is right below the surface just waiting to bust out and that takes away so much energy from her game.

I was not able to watch much of the final. It does appear, though, that Wozniacki's game is slowly becoming more than just defense. And as for handling pressure--she's right there among the top.

Both Russians fizzled today; I think the waiting got to them.

Pretty effective info, thanks so much for this article.