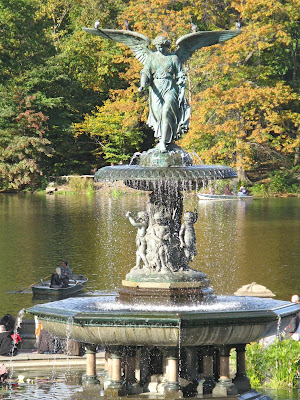 I like the U.S. Open; in fact, it's my second-favorite major. But after last year's drama fest, I'm trying to keep my hopes at a reasonable level. 2009 was in a class of its own, and it's safe to say that, this year, we're not going to be rushing to our television sets or computer screens for the latest dose of high drama.

Don't expect a small Russian-slayer in pink and yellow shoes to appear and inject world-wide excitement into the proceedings. Don't expect a feisty Italian to stand in one place and hit five winners to save six match points (though you still may see some bandages getting unwrapped by a certain emotional Russian). Don't expect a line call to trigger some of the greatest prolonged nastiness and misinformation in the history of the sport. Don't expect to see two Chinese players lighting up the proceedings in the semifinals. And don't expect a just-returning mom to sweep through the draw and win the whole thing, taking out both Williams sisters along the way.

I was sad when last year's U.S. Open was over because the event had become like a mini-series you couldn't help but watch, even though you had to continually suspend disbelief. So what can we expect this year?

World number 1 Serena Williams, who stepped on some glass in a Miami restaurant, is out of the U.S. Open Series. Maybe she has her feet propped up and is watching it on television, surrounded by her flashy nail paraphernalia organized in Hello Kitty boxes. Maybe not. Maybe she's just waiting for the trip to Flushing Meadows, where she'll be bandaged who knows where, and where she'll routinely begin mowing down the field.

What about Maria Sharapova? She's looking better, but is she really ready to play seven consecutive matches?

Svetlana Kuznetsova just won San Diego, but does it mean anything more than that?

Jelena Jankovic is always a strong contender, but--back pain, a cold, a sprained ankle, hot feet--the tennis version of "The Princess and the Pea" has trouble getting through those last couple of matches.

Elena Dementieva is always a contender, too, but appears to be winding down, at least somewhat.

Li Na did so well last year, and is such a good hard court player, I'm putting her into the mix.

The defending champion, Kim Clijsters, hasn't been playing much tennis lately, though she is competing in Cincinnati. She had a serious injury earlier in the season, but is reported to have healed. Her chances of defending her title are actually not bad.

Finally, is there anyone who could sneak past the field and become a surprise champion? It's doubtful, but that would be some drama.
Posted by Diane at 10:41 AM

BTW, did you watch Angels in America mini-series, or theatre show? The picture reminded me... :)

I saw the HBO version, yes! The Angel of the Waters. Wasn't that the best television adaptation ever?