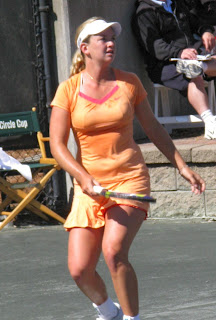 Coco Vandewegh, winner of the 2008 junior girls U.S. Open title, beat both Bethanie Mattek-Sands and Sloane Stephens in order to qualify for the main draw in San Diego. In the first round of main draw play, she had some luck when Gisela Dulko retired with a sprained ankle. Last night, though, she made it through the second round by upsetting the 3rd seed, and she did it from being a break down in both the second and third sets. Vandeweghe defeated Vera Zvonareva 2-6, 7-5, 6-4.

In doubles, the wild card team of Liezel Huber and Lindsay Davenport lost in the quarterfinals. They were defeated 7-6, 6-4 by Bethanie Mattek-Sands and Yan Zi.
Posted by Diane at 9:41 AM

What is the take on Vandeweghe? It seems the minute that commentators see a young player upset a top seed, the commentators pull out the red carpet. "Yeah, I think she is going to be a factor and in the top (substitute whatever no. you want)." Is this just in my head or do any of you sense this kind of quick judgement? And when I hear commentators or writers make these comments are they talking quickly to reach a high spot or in 2 or 3 years? Anyway, what was wrong with Vera or what was right with Vandeweghe?
Some comment-all questions!

First, Sunny, you are probably listening to U.S. commentators, who are desperate for someone to be the next big star. Vandeweghe hasn't done much since her big junior win in 2008. She also put on a lot of weight, though I don't know if she still has it because I haven't seen her since April. Anyway, that probably didn't help her.

Zvonareva is just coming back from a minor leg injury. Maybe she was a little uncertain? Or maybe Vandeweghe just took it to her--that happens.