The unfortunate consequences of Melanie Mania 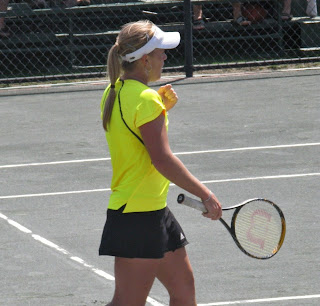 If Melanie Oudin could have a new word imprinted on her shoes right now, that word would probably be "forget." The 18-year-old from Marietta, Georgia has not had as good a season as she might have expected. Today, she lost to Fed Cup teammate Bethanie Mattek-Sands in the first round of the Rogers Cup, and the loss probably wasn't much of a surprise to fans.

Oudin has had good runs this year in Paris (semifinals), Memphis (quarterfinals), Ponte Vedra Beach (quarterfinals), and Charleston (quarterfinals); everywhere else, she has fallen in the first or second round. At Wimbledon, where Oudin made it to the round of 16 last year, she was defeated in the second round by the ever-threatening Jarmila Groth. Her season has been inconsistent so far, and fans tend to remember the failures, rather than the successes.

As the U.S. Open approaches, I can't help but consider what a task it must be for Oudin to just go about her business. Her run last year was one of the most exciting events in women's tennis during 2009. She became a media darling, which is just about always a bad thing, especially in the U.S. We like to turn people into overnight icons, and then tear them down with the same enthusiasm with which we created them.

Melanie Oudin does not exist to "save" U.S. tennis. She is a spirited young player with a great forehand and great footwork, and she has all kinds of problems with her serve. My best guess is that--at this point--she has significant problems with her confidence, too. While her image is being flashed all over television (she's the "upstart" in the U.S. Open Series promos), she's losing matches. Just this week, she acknowledged that she has probably done too much media lately.

Does she need a better handler? Maybe. She's a poised young woman, but the operative word is "young," and maybe she could use a bit more guidance than she currently gets. She certainly could use some help with that serve.

But my objective here is not to tear down Oudin; rather, it is to suggest that we should leave her alone. The 2009 Wimbledon and U.S. Open runs were remarkable--so much so, that Oudin cannot live up to them. I still think that she has a good deal of potential, but--for whatever reason--she has not met it this year. I have seen her play twice this year--in Charleston and in the Fed Cup semifinals--and there is just something about her that pulls me in. As readers of this blog will know, I'm definitely not looking for someone to save U.S. tennis: I just enjoy Oudin's on-court persona, and I appreciate the things that she does well.

I have no idea whether Melanie Oudin will find a way to serve better and more consistently, and to use her other skills to move up in the rankings (she is 44 now, but a drop after the U.S. Open is expected). I certainly hope she does; I don't want to see that forehand go by the wayside. But she could also fade away; only time will tell. She'll be 19 in September, and for women's tennis these days, that's young.

In the meantime, no one can take away her 2009 Russian-smacking mission at the U.S. Open. Maybe it was too much, too soon. Maybe it was just one of those things. Some fans still want to believe...as corny as that may sound. But  in the end, Oudin is simply an 18-year-old who--like any 18-year-old--doesn't need to be bludgeoned by vicious criticism before she even has a chance to call herself an adult.
Posted by Diane at 8:02 PM

Diane, very good post. I had occassion to listen to Ken on Radio Tennis recently while he was calling an Oudin match. I asked him what specifically Oudin could do to turn her results around. He said without hesitation that she needs to change her grip.

He says that she hits her serve and forehand with the same grip. Now if you play tennis you know that most players hit their serves with a Continental grip and forehands with the Western. I think Oudin does it the other way around. As a result, she does not get much pace on the ball and that is why her serves are so attackable.

In addition, he is of the view that Oudin does not know how to construct points. I posited the view that perhaps she is trying to play Big Babe tennis and she is a small babe.

There is another small player on the circuit who gave the big women on the tour fits, and her name is Justine. Perhaps Oudin could learn a thing or two from watching Justine's matches.

Ken also mentioned that each time Oudin serves, instead of standing on the baseline or moving into the court so that she can be aggressive and control the point, she reverts about 6 feet behind the baseline and just starts rallying. She has no idea what to do and when she gets tired, she just starts blasting the ball. I think she goes way behind the baseline because that will take away any chance for her opponents to attack her backhand. Maybe she needs a new coach because the stepfather is really not doing much these days.

I did notice her grip on the serve when I was sitting close up to a one of her mtches, and I forgot about that. That is a definite liability, and I don't understand why she has not been re-directed.

Henin is Oudin's tennis idol, so I imagine she has watched a lot of Henin matches. She needs to emulate Henin's aggression, for sure, and she needs (mostly with her serve) to put herself in control of points to avoid just blasting the ball from the baseline.

It will not succeed in actual fact, that is what I think.