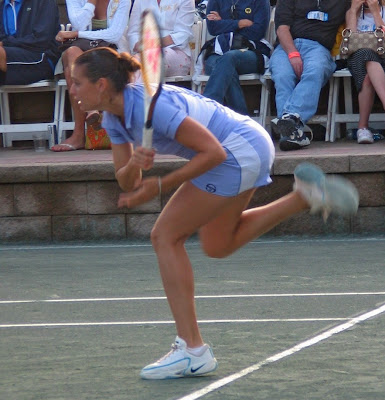 I really enjoy watching both Flavia Pennetta and Bethanie Mattek play, and I wasn't disappointed when I watched their East West Bank Classic semifinal today. Though both women had significant problems with their serve, they provided a very tasty buffet of tennis, with plenty of slices, lobs, down-the-lines, and sneaky drop shots. Pennetta had some trouble with a foot blister, but fought through it. It was a superb match, with a lot of momentum changes, but in the end, Pennetta figured out a way to win.

Pennetta, who is seeded number 10 in Los Angeles, has come close so many times, but has never before a reached a final at this level. She will face the winner of the Jelena Jankovic-Dinara Safina semifinal. Bravo!
Posted by Diane at 5:34 PM