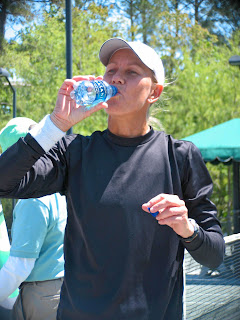 Rennae Stubbs was named WTT Championship Weekend's Most Valuable Player
The New York Buzz has won its first World Team Tennis championship, defeating the Kansas City Explorers, 21-18 in the weekend's season championship event. The Buzz is a 14-year-old team that has reached the championship final three other times.

Rennae Stubbs, Kveta Peschke and Yaroslava Shvedova play for the New York Buzz. Stubbs was chosen as Championship Weekend's Most Valuable Player. Stubbs had the highest winning percentage of any player in the semifinals and finals.
Posted by Diane at 9:18 PM