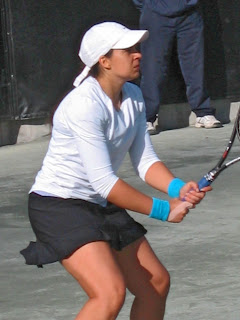 Marion Bartoli took out defending champion Anna Chakvetadze in Stanford tonight
When they are playing well, is there anyone more fun to watch (Patty Schnyder excepted!) than Anna Chakvetadze and Marion Bartoli? They met tonight at the Bank of the West Classic, and put on a great show. I reported in April that Bartoli was not only serving well, but had changed her peculiar service motion; she has now changed it again, and is again serving well. It was nice to see defending champion Chakvetadze--who has struggled so much since her world was seriously altered last December--do some of the things that make her such a good player. But she was not focused enough to undo a clever and--at times--deadly-accurate Bartoli. Bartoli won, 6-3, 6-4. It was a very entertaining match. I like both of these players a lot and would have been pleased to see either of them win.

Then there is the matter of Sam Stosur, who--having been defeated by Aleksandra Wozniak in qualifying--became a lucky loser (via Lindsay Davenport's withdrawal), and had to play Wozniak again. And she lost again. I don't know what's going on with Wozniak, but she's suddenly having her best season.

Dominika Cibulkova perhaps gained some type of record-keeping fame by retiring at match point. She held three match points herself in the second set.

And Patty Schnyder, once again, was unable to overcome Serena Williams, who defeated her, 6-4, 6-1.

Bartoli will play Ai Sugiyama in the semifinals, and Williams will play Wozniak.
Posted by Diane at 11:50 PM

There's an interview with Wozniak on YouTube (in French) from earlier this year... She says that she's realised what she has to do to break into the top 50 (her goal for this year), including playing less tournaments and playing more aggressively. So far, seems to be working!
It's at http://www.youtube.com/watch?v=Dzf6LJ55N1w

I don't understand enough oral French to get it, Craig, but other readers will appreciate the video, I'm sure. Wozniak has every reason to be proud of herself.