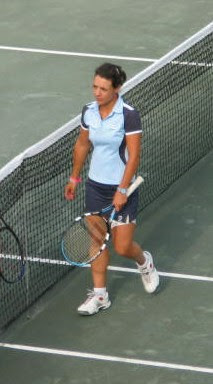 Nuria Llagostera Vives won both of her singles rubbers and her doubles rubber, to take Spain into the Fed Cup final

Nuria Llagostera Vives--all 5 feet 1 1/2 inches of her--beat Peng Shuai today to make their rubber the deciding one in the Fed Cup semifinal contest between Spain and China. China was favored to win, but the sharp-serving Spaniard with the great backhand down the line was too dominant.

The U.S. team managed to win two rubbers, which is probably two rubbers more than expected. Ahsha Rolle beat Elena Vesnina in straight sets, and the team of Liezel Huber and Vania King defeated Vesnina and Svetlana Kuznetsova. Russia, however--having won three of the singles rubbers--is through to the final.