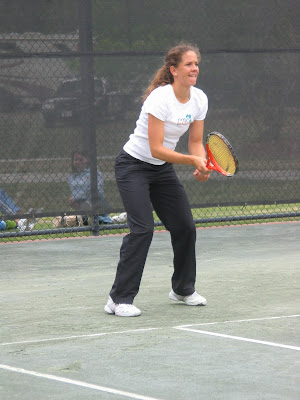 Patty Schnyder is through to the round of 16 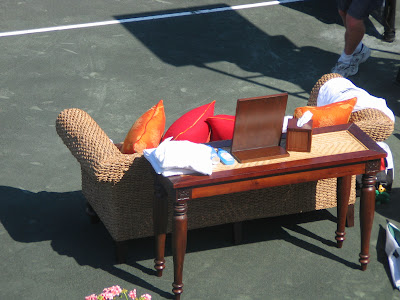 One of the Charleston-style sofas used for players during matches

It was so hot today, at least for me, that my heat allergy kicked in and I was miserable part of the time. I was so miserable, in fact, that I had to get a cool pack to put on my eyes. The tennis was great, however, starting with a match between Patty Schnyder and Olga Govortsova. Schnyder was out of sorts, not getting her serve in, and making too many errors. At one point in the match, she became frustrated, and looked over at us with a "What the hell am I doing?" look. A bit later, she looked over and let out a few words we didn't understand, but we got the message. It turned out fine, though, with Schnyder winning, 7-6, 6-0. Obviously, she found her game in the second set. We are used to seeing Patty play in the main stadium, and this was the first time we have ever hung our Patty banner on the fence in the Althea Gibson Club Court.

When Schnyder was practicing Monday, I saw her point out something about her hip and lower back to her physio. Today, I noticed she was not using her very effective kick serve, and I am now suspicious that something may be going on physically.

I saw almost all of the match between Alize Cornet and Sara Errani. The quality was good, though it was far from the most exciting match I've seen. A big issue in this match was the line calling, which was all over the place. Cornet has a bit of a temper, which was on display several times during this grueling contest. The two players were well-matched, though Cornet was the better server, and she won, 6-3, 2-6, 6-3.

For thrills, the match to watch was the one between Agnieszka Radwanska and Edina Gallovits. I saw the first few games, then left. When I returned, the players were in a first set tiebreak, which Gallovits won. Gallovits then became a nervous bundle of errors, easily gave up the second set, then disappeared from the court. When she returned, she was a different player, serving up a storm, hitting beautiful drop volleys, and generally making life difficult for Radwanska. In the end, though, Radwanska played the big points better and eeked out a victory, 6-7, 6-2, 7-5.

I also watched Kveta Peschke and Rennae Stubbs for a while, and had photos signed by both Stubbs and Schnyder. And I caught Bud Collins' interview with Jelena Jankovic after her victory over Alex Stevenson. This evening, we watched Maria Sharapova do some warm-up excercises, then we had dinner, and returned to watch her serve two bagels to Bethanie Mattek. Not to worry, though: Mattek returned in half and hour, and--with partner Vladimira Uhlirova--won the featured doubles match against Lourdes Dominguez Lino and Sara Errani, 6-1, 3-6, 10-3.

Tennis outfit of the day: Though it may surprise many--Bethanie Mattek, at least for her doubles match attire. Mattek had on a black pleated skirt, black capri tights and a black top with thin straps. For her doubles match, however, she kept her warm-up top on--black, with one 3/4 length sleeve, one long sleeve with a white cuff, and some kind of silver design embossed on the upper left sleeve. The effect was striking, and she looked good.
Posted by Diane at 12:28 AM

Nice blog!!! Did you take some photos of Alize Cornet ??? I make her official website (www.alize-cornet.com) and I am looking for photos from Charleston. If you took some, could you sen me by email??
My email address is info@alize-cornet.com

Yes, I have taken a lot of photos of Alize. I won't see them or edit them until I get home, but then--if you still need them--I can send you some. I'll get in touch upon my return.