Schnyder vaults Pole out of Charleston 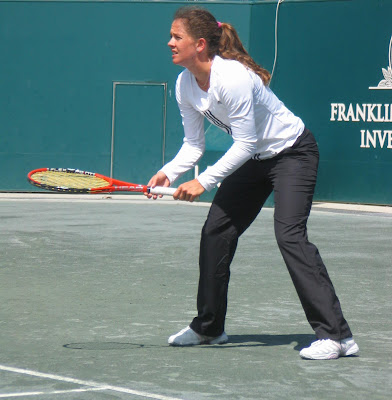 A skillful Patty Schnyder took Agnieszka Radwanska out of the Family Circle Cup tonight
Agnieszka Radwanska, searching for an answer--any answer--to the puzzle created for her by Patty Schnyder, threw so many defensive lobs in her round of 16 match in Charleston tonight, I grew tired of looking up. They were good defensive lobs, but all they did was buy the young Polish star some time. Looping backhands, sneaky approach shots, tricky drop volleys, constant change-ups--Schnyder opened a whole can of clay court whoopass on Radwanska, and left her just a beat behind for most of the match.

Schnyder had a lot of trouble getting her first serve in, but when she got it in, it was almost always successful. The Schnyder second serve is generally reliable, and tonight was no exception. Radwanska has been very impressive in Charleston, beating an extremely in-form Marta Domachowska and an aggressive Edina Gallovits. But Schnyder would not let her have any kind of rhythm, thus keeping her from winning points with the deadly groundstrokes she has delivered all week.

Schnyder was broken once in the first set, and she broke Radwanska twice. Radwanska began the second set with a 2-0 lead, but after that, it was all Schnyder, who won six games in a row. Schnyder def. Radwanska, 6-3, 6-2
Posted by Diane at 11:37 PM

Is that a current pic of Patty because it looks like she is using last yr flexpoint radical. I guess she has a paintjob of the microgel for the actual matches.

And great job on the reporting.

That's a photo from last year.