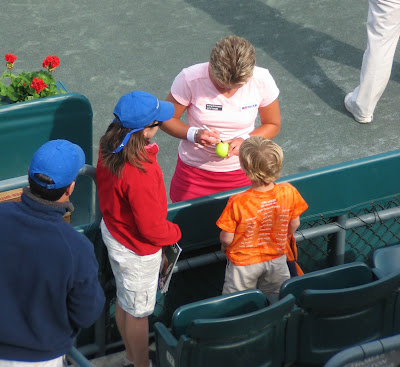 Michaella Krajicek signs autographs after her 2007 victory over Nicole Vaidisova
At least of two of the first round matches in Charleston have grabbed my interest:

Radwanska v. Domachowska: Marta Domachowska was off the tour for quite a while, and returned with a flourish during the Australian Open, when she got to the round of 16 and made things difficult for Venus Williams. However, despite being the top qualifying seed, Domachowska failed to qualify in Vina del Mar. She then made it to the second round of the Sony Ericsson Open, but was defeated there by Williams.

Domachowska will play her countrywoman, Agnieszka Radwanska, in the first round of the Family Circle Cup. And while Radwanska is clearly the favorite, Domachowska is capable of performing an upset.

The other first round of interest features last year's Charleston wild card star Michaella Krajicek and young French star Alize Cornet. Krajicek stormed through Daniel Island last year, taking out both Nicole Vaidisova and Sybille Bammer before falling to her own anxiety and an in-form Vera Zvonareva. Of all the young talented players, none is more inconsistent than Krajicek, and it is impossible to guess who will win the contest against Cornet.
Posted by Diane at 4:49 PM