Krajicek out in first round--again 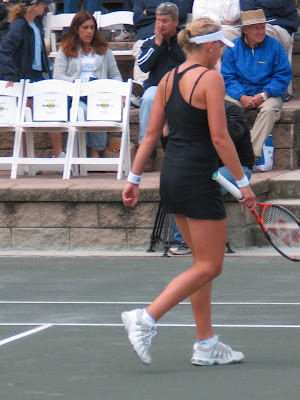 Once again, Michaella Krajicek has crashed out in the first round of a tournament, this one a Tier IV. She hired a new coach recently, so perhaps something will change for her, but it doesn't look good. Krajicek is undeniably talented, but she is rather badly stuck, in terms of her career. Today, she was defeated 6-4, 6-4 in Prague by Akgul Amanmuradova.

Last week, Krajicek went out in the first round in Charleston, but I'll cut her some slack because her opponent, Alize Cornet, was to the Family Circle Cup this year what Krajicek herself was to it in 2007--the most exciting player there. When Cornet was finished with Krajicek, she took care of Sara Errani, Sorana Cirstea and Agnes Szavay, and was finally stopped by Serena Williams.

Something needs to change, and soon.
Posted by Diane at 7:32 PM