In and around the grounds in Charleston 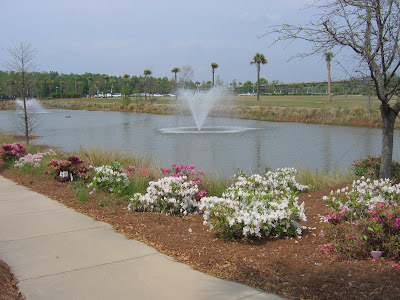 A view of the entry pathway to the stadium
The weather was very chilly today, with a lot of wind. Fortunately, the wind did not pick up much during the night matches, so we were comfortable with a lot of layers and a stadium blanket.

In honor, I suppose, of the 35th anniversary of the Cup, the stadium music this year consists of oldies only. If you keep your eyes and ears open, you notice a lot of people singing along to "Ain't No Mountain High Enough."

Dominika Cibulkova had to retire in her second round match today, presumably because of the thigh injury she sustained in Amelia Island last week. Her retirement was a real disappointment. She stuck around, however, and I imagine there is a fair chance she will still play doubles. I met her this afternoon, and she was charming and delightful. Meghann Shaughnessy also had to retire today, though I don't know why.

I also met Jill Craybas today. She and Cibulkova each signed photos I had taken of them, as did Michaella Krajicek (yesterday, Katarina Srebotnik and Yuliana Fedak signed some). I also watched Maria Sharapova practice for a while, which was fun.

If you like Angela Haynes' signature head scarf, you're out of luck. She has ditched it for a flaming orange Afro.

The 35th anniversary ceremony took place this evening. Most of the players participated, except for the ones who had to play later, and the ones who had already left the tournament. Bud Collins was the master of ceremonies, and one of the best things he did was to give the fans some lessons on how to pronounce players' names. Thank you, Bud. There was an introduction of each available player, and it was nice to see the women standing out there in regular clothes. Serena Williams, Jelena Jankovic, Patty Schnyder (a heavy Charleston favorite), and Maria Sharapova got a lot of applause. Rennae Stubbs gave Ai Sugiyama a hug, and everyone appeared to enjoy the moment.

When the introductions were over, the women produced tennis balls they had autographed, and then threw them into the stands. We caught Victoria Azarenka's! Then another one bounced right in front of us, so we got that one too, but I haven't yet figured out whose signature is on it. I will, though, and when I do, I'll report it.

After the last night match, there was a lovely fireworks show, then we went back to the hotel.
Posted by Diane at 12:48 AM