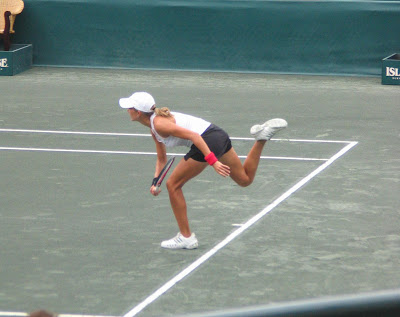 The first match we saw today was a contest between Gisela Dulko and Alicia Molik, and Dulko was very impressive with great serving and the use of clever clay court strategy. So expertly did Dulko play that Molik was left with virtually nothing but her good serve, and today, Dulko's serve was just as good. Dulko def. Molik, 6-2, 6-3

Then we saw Yuliana Fedak take on Agnes Szavay. Fedak is a player I like to watch, both for her tennis and her court personality. "Ai-yi-yi-yi--come on, come on" is her ritualistic chant before serving, and sometimes before receiving, too. She was clueless in the first set and was bageled, but in the second, Fedak brought her game up to an entirely different level, hitting deep, accurate groundstrokes and serving quite well. Her second serve--unlike Szavay's--was very good, and she hit some impressive passing shots. But in the end, Szavay prevailed. Unfortunately, Fedak and her partner lost their doubles match, too. Szavay def. Fedak, 6-0, 7-6

Finally, we saw Agnieszka Radwanska play Marta Domachowska. I was really looking forward to this match, and it more than met my expectations. Whoever plays in the final will have to put on quite a show to top what went on this afternoon between the two Polish women on the Althea Gibson Club Court. Both women hit breathtaking groundstrokes, and both served extremely well. Domachowska was strong on both sides, and Radwanska used the defensive lob successfully over and over. There was also some good volleying. I was cheering for Domachowska and was disappointed when she lost, but it was so close--a point here and a point there made the difference. When the 2008 Family Circle Cup is over and done, I may still think that this was the best match of all. Radwanska def. Domachowska, 6-4, 4-6, 6-3

We watched Patty Schnyder and Virginia Ruano Pascual practice, and we saw Serena Williams on the grounds, going to and from her practice session. We also watched Elena Dementieva hit with Anastasia Rodionova for a while. The wind picked up now and then, making the stadium grounds very chilly, and some spectators had on jackets.

We saw a few nice tennis outfits today. Vania King was once again dressed in something really different--a pastel floral/tropical dress with orange trim. She looked nice. And the always well-dressed Yuliana Fedak was wearing a fitted hot pink T with a navy skirt with free-form hot pink diagonal stripes. However...

The tennis outfit of the day nod goes to Gisela Dulko, looking chic and classic in a pale aqua fitted polo with white trim and a pleated white skirt.
Posted by Diane at 7:21 PM

Great to see hear Gise is playing good :)
Thank you for the information :)

Really thanks for the report , i am Gigi_dulko in WTAWORLD ,

also i have a blog about a player argentinian Eduardo Schwank
http://eduardoschwank.blogspot.com

bye and thanks other time

hi Diane,
thanks for the great reporting, and pictures; you really do make it feel like being there! Nothing at all on Eurosport by way of TV coverage this week...they are usually pretty good at women's tennis coverage, and I don't understand why they aren't doing this one :(

I just had a look again at the schedule and they have highlights of the semis and the final......big deal! Better than nothing, though, I guess. However.....they are covering, all week, the men's tournament in Portugal, and they don't usually cover the ATP - grrrrrrrrrr.....between that, and snooker and weightlifting, that's the live pick for the week :(

you have added a new phrase to my inner dictionary.....'clueless and bageled'. What an excellent description for how I feel sometimes :)

keep up the good work..it's very much appreciated(but I bet the cats are missing you like mad)

I heard that Eurosport was coving the Cup; I guess I heard wrong. That's too bad.

Thanks so much for your comments, Claire. I'll be at it all week.

And as for Roxie, Velma, Ziggy, and Tarzan, we're pretty sure they're in Charleston. There were two Porsches on the stadium grounds on Saturday and now one of them is missing; we suspect Roxie.