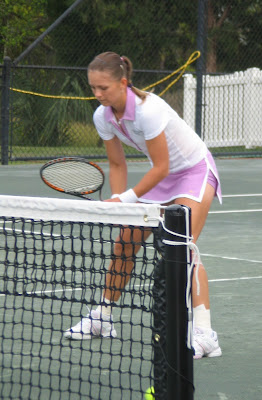 I have heard Anabel Medina Garrigues scream and shout during a match on several occasions, and I have seen her throw her racquet. But until today, I had never seen her cry. But in her second round match against Tatiana Perebiynis, Medina Garrigues had a meltdown as big as her feisty court personality. We arrived just after the first set was completed. Medina Garrigues took that set, 6-4, and we settled down for what we thought would be a victorious second set.

The last set was much better for Medina Garrigues. She regained her serve and got a grip on herself in general. Perebynis began to make errors and was broken, and it looked like Medina Garrigues fans (of whom I am one) would have a happy outcome after all. But Perebiynis regained her footing and returned to making precision shots. Medina Garrigues had a major temper outburst, followed by more tears, and received a time violation warning from the umpire. She was broken twice in that set, and a steady, accurate Perebiynis moved on to the third round.