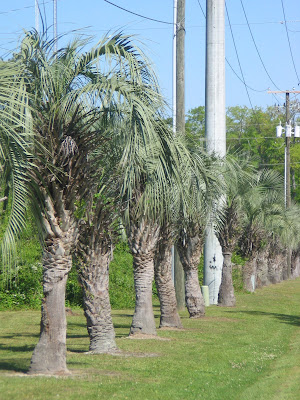 Palms and palmettos line the highway from Mt. Pleasant to Daniel Island

We arrived in Mt. Pleasant yesterday evening. Our hotel has all kinds of Internet connection problems, so we are moving to another hotel tomorrow. It is a stroke of good luck that we actually found a hotel with a week-long vacancy. We attended qualifying today, but it wasn't nearly as interesting as usual, since some of the better players had been moved to the main draw. We saw a lot of the match between Sun Tintian and Vanessa Henke (Sun won), and we watched Patty Schnyder practice with her hitting partner. I saw her talk with her physio about what appears to be some sort of hip/lower back issue. I surely hope it isn't anything too serious.

There are a lot more past champion banners up on the grounds this year. Mysteriously, Nadia Petrova's banner--one of the three larges ones hanging outside the stadium--is missing. A nice touch this year is the creation of a 35th anniversary poster with an exceptionally creative design that shows former champions in picture frames that are arranged on a wall and on a dresser.

Since the qualifying rounds were not up to expectations, we left the grounds and came back to watch the Amelia Island semifinals, only to discover that one of them had been cancelled because an ill Lindsay Davenport gave Maria Sharapova a walkover.

The sun is very bright today, and it is hot. However, a front is coming in, and both Monday and Tuesday should be on the cool side. The weather here in April is totally unpredictable, so we watch the forecast, but we also know that conditions can always change dramatically and suddenly.
Posted by Diane at 2:08 PM