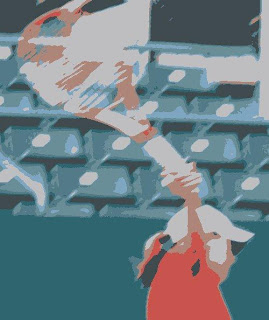 I reported on January 26 that seven-time major champion Justine Henin had retired from professional tennis. This was Henin's second time to leave the sport; she also retired suddenly in 2008. At that time, I wrote this and this about her retirement. Now, with my own post-Australian Open fatigue, I will not go on and on about Henin. However, her exit from the sport is big news; for me, however, it was not news to be discussed while we were enjoying the peak of the action in Melbourne.

Justine Henin had one of the most beautiful--and deadly--tennis games I have ever seen. Even though one generally knew what she as going to do, it was still always exciting to watch her do it. Henin also displayed an athleticism that was all the more amazing because of her relatively small size. Her return to the tour, which appeared to be motivated--at least in part--by a desire to win Wimbledon and achieve a career Slam, did not go the way she expected it to go. When she reached the final of the 2010 Australian Open, she generated a lot of talk, of course. But she was beset by injuries and a decrease in mental toughness, and in the end, the pain from her injured elbow forced her off the tour.

I admired Henin in a rather detached way because I had trouble tolerating her high sense of drama about herself and her (seemingly always urgent) feelings, I saw her push the sporting envelope too far too many times, and I couldn't get past her 2006 Australian Open retirement against Amelie Mauresmo. Henin was apparently an acquired taste--and one I did not acquire. But I very much liked watching her play, and I'm always sorry to see someone have to leave the game because of injury. I consider her a great tennis player, and her dominance at the French Open is of historical importance within the sport. Perhaps the saddest thing, from a fan standpoint, is that there is not likely to be anyone else who plays the way she did.
Posted by Diane at 2:33 PM

I really have some big problems with your beliefs about the 2006 AO final. I've dealt with overdosing on anti-inflammatories and know what doctors say. But I am pulling back because given my situation I just cannot get into this without a lot of emotion directed at the tennis community, which would not be good for me at this time.

If you go back and read what I wrote upon Henin's first retirement, I did say that I thought--considering what had happened to Henin medically--that we should allow that she really needed to retire from that match--that things had changed for her and she was more vulnerable. So that was my belief because I was trying to be fair and not launch an attack on her.

That belief has not gone away entirely, but over time, I have become less inclined to subscribe to it when I look at that moment in the context of a long pattern of behavior. For some of us, one of the standard-bearers of the sport was robbed of a great moment because another player (maybe not known as quite such a standard-bearer) retired in the second set of a major final.

For the record, I appreciate your point of view. It would have been just a bit easier for me to accept what happened if it had been another player.

I think Henin wasn't one of those who quit when things go wrong. She was too good to do such things. I always had a feeling she is taken to a higher standard than most of other players.
I think if she quit in her match against Clijsters and did not play through an injury we would still have her on the tour today. Shame she hasn't done it.

I'm sad to see her go and I have a feeling that her comeback wasn't very well managed. The new style of play was not what I was used to seeing from her and I think it did cause a lot of damage to her health and also lead to a loss of confidence in her game. The old Henin was fearless but the comeback kid was sometimes looking rather confused and insecure. It's a shame as she has so much potential still left in her. A part of me kind of hopes they found a way to cure her injury so that she could continue playing but that probably won't happen. Sad to see her go in such circumstances.

I've also suspected that the comeback style may have tipped her over the edge, health-wise. I could never quite figure out how she got everything she got out of that small frame, to begin with.