"You do the Hantuchova and you turn yourself around..." 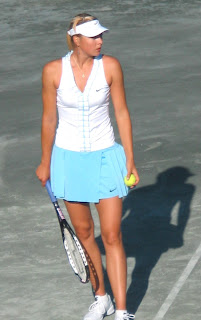 One cannot think of Mary Pierce without recalling all the times chair umpires let her get away with exceeding the service preparation time. (I can't find the link, but once, during the French Open, Pam Shriver left the broadcasting booth to go confront the umpire with the fact that Pierce was taking too much time.) One wouldn't have been surprised if Pierce had pulled out a compact and freshened her makeup before serving, so involved was she in painstakingly getting everything "just right" before serving.

Before she began designing her own clothes, Venus Williams used to tug on her top so much, you might have confused her with Andy Roddick. Maria Sharapova's three (now it's two) precise ball bounces, followed by the left hand sweeping the hair back on each side--all accompanied by a stern facial expression--was easy to imitate, and Novak Djokovic had some fun with it during his more light-hearted "entertainer" days.

Ana Ivanovic's close-to-the-body mini-fist pumps drive some people to distraction. Kim Clijsters turns her racquet and stares at it intently, as though the answers to the match are hidden somewhere in the strings. 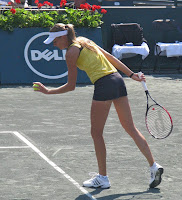 But the mannerist queen of the current tour is undoubtedly Daniela Hantuchova. Hantuchova's service preparation is a project unto itself. She walks quite a distance behind the baseline and turns her back to the net. The she turns back around, approaches the baseline, and bounces the ball repeatedly with her racquet as though she were dribbling a basketball. This causes her to get very animated. When this routine is done, she bounces the ball slowly and deliberately five times--never four, never six. Then she serves. 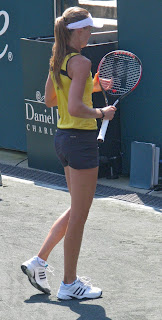 But that isn't all. Hantuchova often walks away from the baseline and turns her back to the net before her opponent serves. Given the rule that the server determines the pace, anyone serving to Hantuchova would be within her rights to serve to her back, but no one does. Hantuchova has been questioned about this behavior, and she maintains she is just collecting herself before she receives serve.