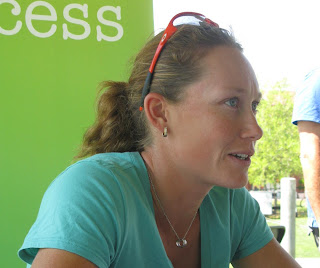 It was a cold, dark morning in Paris, and Justine Henin had been through a lot--playing in the dark, playing in the rain, stopping, starting, stopping, starting, and facing a fierce challenge from Maria Sharapova. She said, after her round of 16 match against Sam Stosur, that she was nervous, "which is normally not the way I am." Facing Stosur without having a day off, Henin nevertheless won the first set, 6-2. But when the second set began, Stosur went up 3-0. She would win that set 6-1. The third was more of a contest. Stosur broke Henin at 3-all, then Henin broke her back.

When Stosur broke again, it was the beginning of the end. When she served for the match, the Henin backhand smashed balls into the net three times. Stosur, not immune to a case of last-minute jitters, then double-faulted on match point. But that was just a temporary glitch in the round of 16 run of Sam Stosur, who won, 2-6, 6-1, 6-4, on her next match point.

Stosur had six break opportunities throughout the match, and converted four of them. She hit 26 winners (to Henin's 14), did quite well at the net, and posted first and second serve win percentages of 66 and 70. The balls were heavy, as they have been for a while now at Roland Garros, and Stosur put a lot of her signature topspin on them, aiming them high to Henin's backhand, taking away one of the Belgian's greatest strengths. It was a smart way to play Henin--regardless of the condition she was in--and it paid off.

Stosur, who is seeded 7th at the tournament, has now won 18 matches on clay this season--the most of any woman on the tour. She will face the number 1 seed, Serena Williams, in the quarterfinals.
Posted by Diane at 3:39 PM