Kuznetsova out in first round in Stuttgart 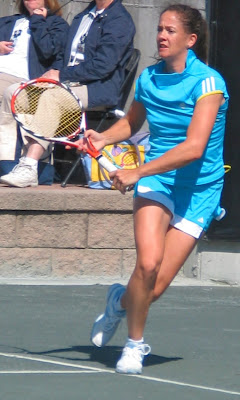 5th-seeded Svetlana Kuznetsova, the finalist in last week's tournament in Beijing, lost in the first round of the Porsche Tennis Grand Prix in Stuttgart today. Kuznetsova was defeated, 6-4, 5-6, 7-5 by a hot-serving Patty Schnyder.

In the few matches of hers that have been shown recently, I noticed that her backhand is more solid too. Less errors from that side and she is willing to step into them more. Great job Patty

what's wrong with Sveta?!?! she used to be a stable in the quaters and semis but recently she's been losing sooo early!

I'm not sure. This tournament kind of doesn't count, though, because it is so extremely competitive. Players who usually meet in quarterfinals or semifinals are meeting in the first round!

I think Kuznetsova has lost so many finals that her confidence is probably at a very low level, so now she's losing in earlier rounds, too.