3 in a row for Jankovic 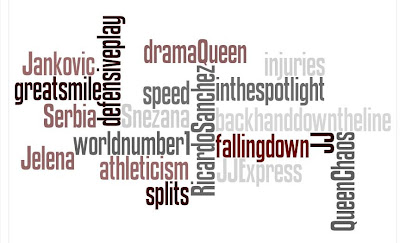 Not since 2005, when Nicole Vaidisova did it, had a tour player won three tournaments in three consecutive weeks, but now Jelena Jankovic has accomplished this feat. And--while the then-very young Vaidisova is to be credited for her accomplishments--the tournaments she won were of a lower level than the three just won by Jankovic.

Jankovic defeated Vera Zvonareva 6-2, 6-4 to win the Kremlin Cup, and in doing so, she puts her lifetime tour final record at 9-10. This was also the third week in a row that Jankovic defeated Zvonareva: She beat her in the semifinals in Beijing, and in the quarterfinals in Stuttgart. The Beijing and Stuttgart matches were much closer.
Posted by Diane at 10:14 AM

Really great illustration!!
And I hope JJ will continue with the good results!