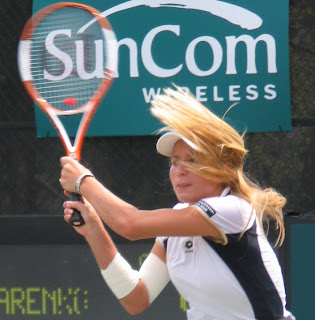 I sometimes call Alona and Kateryna Bondarenko "the fighting Bondarenkos" because they used to fight with each other while playing doubles. But today, Alona Bondarenko earned the name "fighting Bondarenko" because of the tremendous battle she waged against Alize Cornet in their Zurich Open first round match. Beaten 1-6 in the first set, Bondarenko went on to win the second set 6-3 (after being down 0-3), but she found herself down 1-5 in the third. When Cornet served for the match, Bondarenko broke her, then held, then broke Cornet again when she served for the match a second time. The match went to a tiebreak, which Bondarenko won, 8-6. She saved a total of five match points, and moves on to the second round.

Now, that's a fighting Bondarenko.
Posted by Diane at 5:21 PM