Doubles star Virginia Ruano Pascual announced her retirement from professional tennis yesterday. She will play through the end of this season.

The well-liked Spaniard, who is 36, has enjoyed an outstanding career as a doubles expert on the tour, winning ten majors, most of them with Paola Suarez. Ruano Pascual and Suarez were also the finalists in six majors. Between 2002 and 2004, they reached the finals of nine consecutive majors, and won five of them. 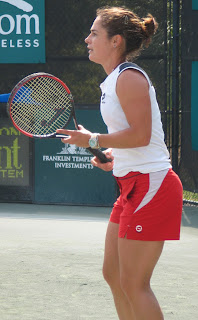 Ruano Pascual also won three singles titles, and she won the Olympic silver medal in doubles in both 2004 and 2008.

I once found myself standing in front of Ruano Pascual in an airport line, and I was struck by how beautiful she was. She and close friend Suarez were wildly popular with fans, not only for their tennis but because of their easygoing, good-humored court demeanor. (I once saw Ruano Pascual receive a warning from a chair umpire because she couldn't stop laughing over something her partner had said to her.)

"Vivi," as she is known to her friends, was honored in Madrid yesteday with a farewell ceremony. She has a place in history as one of the tour's greatest doubles players.
Posted by Diane at 10:54 AM

Sad to see you leave Virginie. many thanks for all the memories