When the French Open began, players and commentators talked about how fast and dry the courts were. Now they're slow and wet, and for some players, that represents a change of fortune. Showers are predicted for Paris Sunday, Monday and Tuesday, with percentages of 60, 40 and 40, respectively, which means that Roland Garros could be spared. But it also means humidity, and players can expect the tennis balls to be heavier than they were when the tournament began. 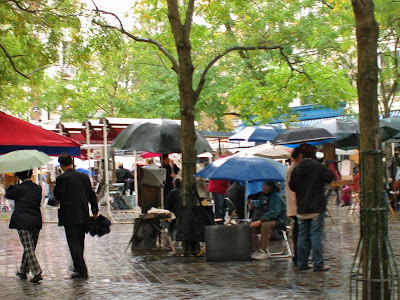 Wet conditions favor clay court experts and specialists, like the Italians and the Spanish (there are still Spanish players in the doubles draw). They also favor players who can stop and start their matches without coming unglued.

Speaking of Italians, there are two still in the singles draw. Not surprisingly, they are Flavia Pennetta and Francesca Schiavone. Pennetta has had a poor clay season so far, and she will have to be sharp against third round opponent Palona Hercog, who has already upset Lucie Safarove. Schiavone will play Li Na in the third round.

Because of the rain delays today, second round play was not completed. When darkness fell, Bartoli and Sanchez were still playing the first set. Sanchez served for it at 5-3, and was broken, then play was suspended. 22nd seed Justine Henin, playing Klara Zakopalova, took the first set 6-3, and play was stopped when Zakopalova was about to serve at 2-3. Maria Sharapova took her first set 6-3, also, and she and Kirsten Flipkens were at 2-all in the second.
Posted by Diane at 9:50 PM