Mara Santangelo to play doubles only 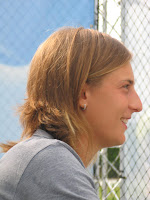 Mara Santangelo has ended her singles career. As most fans know, she has had to deal with a serious foot problem since she was quite young, and she has decided that it will be better for her to play doubles only from now on.

Santangelo, known for her stylish shot-making, won the Bangalore Open in 2006, and was a finalist in 2007. With various partners, she has won nine doubles titles, including the 2007 French Open (with Alicia Molik). Santangelo was on the Italian Fed Cup team for three years, and she was on the Italian Olympic team in 2008.
Posted by Diane at 7:44 PM