Madrid, where the upsets keep happening

Second round play continued in Madrid today, and why should today have been any different from the other days? 2nd seed Caroline Wozniacki was sent packing by Alona Bondarenko, who put on a display of hitting that was most impressive. The longer the rallies went, the more angles Bondarenko found, and she overcame Wozniacki 6-2, 6-3.

6th seed Elena Dementieva played a 14-break three-setter against Alexandra Dulgheru, which Dulgheru won, 6-1, 3-6, 7-5. The match went on for almost 2 hours and 33 minutes, though the outcome look much better for Dementieva was she was up 4-1 in the third set, with two break points.

It has taken Dulgheru a long time to put herself back on the tour radar since she accomplished the unusual feat of winning the very first tour tournament she ever entered. After she won Warsaw (as a qualifier) last year, Dulgheru faded into the background. But this clay season, she has made quite a resurgence, getting to the semifinals in Barcelona, and the third round of the Italian Open, where she defeated both Sara Errani and Dinara Safina. 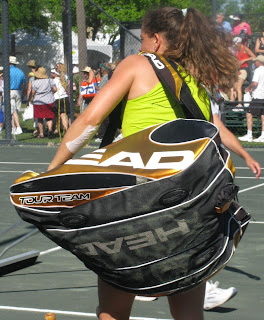 Patty Schnyder, playing 9th seed Agnieszka Radwanska for the second time on clay, had her second clay court victory against her today. Schnyder, who relied on her second serve, defeated the 9th seed 3-6, 6-4, 6-4. Schnyder's other clay win over Radwanska occurred a couple of years ago in Charleston, and was one of the most entertaining matches of the tournament.

Anabel Medina Garrigues perked up her season considerably by taking out 12th seed Marion Bartoli 6-2, 6-0. And Andrea Petkovic, who is also making herself known on the tour, upset 14th seed Flavia Pennetta 7-6, 6-3. She had to work hard, too, saving nine set points in the first set.

Patty Schnyder wasn't content with pulling off just one upset. She and partner Anastasia Rodionova went on to defeat 3rd seeds Nadia Petrova and Sam Stosur  4-6, 6-4, 10-6. Petrova and Stosur had a bye in the first round, so this was their first match.

Rome champion Maria Jose Martinez Sanchez held a set point in her first set against 8th seed and Charleston champion Sam Stosur, but did not convert it. Stosur went on to win, 7-6, 6-4.
Posted by Diane at 6:30 PM

The top players, top ten are forever in flux. Attrition is the word. Some people are just losing and losing points, having other players pass them up because of the formers' losses not because of the latters' successess. The year looks really interesting.

And since almost anything can happen on clay, watch for more upsets.

Sunny that is true in some respects, but I believe that at some point the rankings will reflect the "real" top 10. Two matches that I really enjoyed yesterday were the Schynder and Wozniacki matches. Both matches were so different in styles yet so compelling to watch.

I'm thrilled that Medina Garrigues is having a good week, because she has had a disappointing year so far. I hope that she can go a bit further here.

Sunny, I completely agree with you over the top 10. Roland Garros especially should be very interesting.