I have photographed quite a few tennis players, and there is one player who--if I just shoot repeatedly without even paying much attention to what I'm doing--I wind up with a series of pictures of stretches, splits, twists, slides, and bends. That player is the intensely physical Jelena Jankovic, who is a kind of twisty perpetual  motion machine on the court. (I imagine photos of Kim Clijsters would be similar, but I haven't had the good fortune of photographing her.) 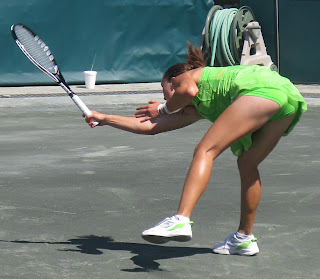 Jankovic has now slid her way to her third Rome final, taking out the Williams sisters, one after another, in two very different matches. Today's semifinal match against Serena Williams lasted over 2 hours and 47 minutes, and featured just about everything you could want to see--except for clean play. Both players committed a lot of errors, both fought hard, and the momentum swung with such intensity that it was useless for fans of either player to get comfortable about the outcome.

Williams took the first set 6-4, Jankovic took the second 6-3, and then the real fun began. Serving at 3-5, Jankovic held, then broke Williams when she served for the match at 5-4, saving a match point along the way. But Williams broke her right back. Williams served for the match a second time, and went down 0-40. She saved those three break points. Williams then hit a smash that was intended to be a winner, but Jankovic got to the ball and passed Williams. She then broke Williams to set up a tiebreak.

Williams, suddenly finding the serve that had eluded her for much of the match, went up 3-0 immediately in the tiebreak, then went up 5-2, but Jankovic finally brought it to 5-all. She then broke both of Williams' serves to take the match, and the up-and-down, drawn-out affair was over. Jankovic, who went through some of her usual turmoil throughout the match, was quite mentally tough when it counted the most.

Between them, the two players double-faulted 17 times. There were 39 break opportunities and 13 breaks of serve. Welcome to clay court season!

The other semifinal was fun to watch, but not nearly as dramatic. I always enjoy watching Maria Jose Martinez Sanchez, whose so-called "old school" tennis constantly exposes the gaps in today's player development. Spin like mad into the corners, then serve flat? No problem. Stretch out wide and hit a volley from the baseline? No problem. Martinez Sanchez has such deft touch, and so much variety--and she also has one of the tour's best serves. It was all too much for Ana Ivanovic to handle, and the Spaniard won the match 6-4, 6-2.

Martinez Sanchez will win this title. She played a good match today. Then they'll be off to the next sandbox with their Shovels, oops...I mean racquets in hand. Hoped Ana would have made it to the finals, would have love to seen that drama played out. On court and in the stands..