Do we need Hawk-Eye on clay?

I don't like the challenge system. Rather, I agree with Mary Carillo that players should have the right to challenge line calls whenever they wish. The last accuracy numbers that were compiled for linespeople at WTA and ATP matches (or at least, the last numbers I saw) revealed that the line callers were correct 70% of the time. I remember Pam Shriver saying how "great" that was, and all I could think of was: What would happen to me professionally if my work was correct only 70% of the time? 70% is far from "great." 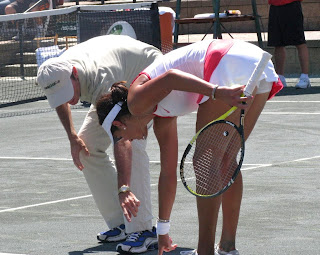 Then there is the matter of Hawk-Eye's absence on clay courts. Because the ball leaves a mark in the clay, the chair umpire is still called upon, if necessasry, to check the mark and determine whether the line caller was accurate in her call. There are problems with this system, however, and the main one is that after a match has been underway for a while, there are many marks in the clay. This year in Charleston, for example, the crowd yelled "Wrong mark!" at a chair umpire, who proceeded to call the line based on the wrong mark. I have seen this happen before.

We have an active clay season, which culminates with the French Open. Is it time to install Hawk-Eye?
Posted by Diane at 2:11 PM

On Thursday I attended the Wozniacki - Zheng match. Caroline and the umpire spent good 15 seconds showing different marks and disputing. Hawk Eye system would make the whole situation clear.
You've mentioned the wrong mark problem, but the other thing is accuracy. No doubt Hawk-Eye is more accurate than a mark on clay.
My view is to install Hawk-Eye if a tournament can afford it. I think that at some point Roland Garros will introduce it and then year by year it will be applied by other big tournaments, such as Madrid.

Yes, Diane I do agree. I often see players taking time between points to rub the clay off of the service or back lines so that wrong marks aren't left. This delays the game and they shouldn't have to feel like they need to take the time to do this. To me it is no different than grass or hard courts. The chalk leaves a cloud often on grass but we have hawk-eye there and even on hard courts marks are left but there is hawk-eye for those courts. Let them all be the same. I do believe that if there is unlimited challenges that the time should be rigorously enforced in how long it takes the player to make the challenge. There is too much time wasted on walking up to lines slowly to check them, then looking at their box to get an opinion and also asking the ump if she/he was sure. Now the umps do it all differently. If you ever saw del Potro challenge you would understand to some degree why Federer used one swear word to the ump at last yrs US Open final because of del Potro.

The time limit needs to be enforced now, anyway, and some umpires are pretty good about enforcing it.

And I doubt there will be unlimited challenges, even though I think there should be. The 3-challenge rule was instituted for "fans' enjoyment."

I agree that there should be a Hawk-eye system at Roland Garros.
However, how do you keep players from abusing an unlimited challenge system? I don't think the 3-challenge rule was instituted only for fan enjoyment. I think it was a way of preventing the system from becoming a part of gamesmanship like the injury time-out and the bathroom break have become.

I don't believe players would abuse it. Oh, maybe one every once in a while, but--as a whole--I really don't think they would. I suppose I think that the current system is so unfair, the limit should be removed.

And all I've ever heard is that the 3-challenge rule was instituted to creat "excitement" for fans.

if you want to talk about fairness, one of the major things about the current system that is unfair is that the review system is only installed on the show courts. Those on the outer courts have no recourse. Leaving the traditional system on clay of checking the mark is at least fair to all the players on all of the courts.

You have a very good point, Anon. That is indeed unfair. And I don't think Hawk-Eye will be installed on all of the courts any time soon, if ever.