Bethanie Mattek-Sands checks in with a report from Paris

Bethanie Mattek-Sands, who rolled her ankle in her third French Open qualifying round and wound up a lucky loser, defeated Vania King yesterday, and is into the second round. She and partner Yan Zi, the 9th seeds, also won their first round doubles match against Timea Bacsinszky and Tathiana Garbin.

Mattek-Sands has praise for the courts at Roland Garros: " Even if the clay here at Roland Garros is dry, it is still better than any other red clay event in Europe," she says, noting that the tournament staff takes excellent care of the courts.

The rain appeared for a few moments yesterday, but today, there is real rain in Paris, which could change the way the courts play. "...it really does not throw my game off. It may for some others, but I try not to let that be a factor for me," Mattek-Sands says of the rain. The USA Fed Cup star likes to play on any type of clay. She reports that the clay at Roland Garros is a bit stickier than the clay at the tournaments preceding the French Open, "which is a nice change." 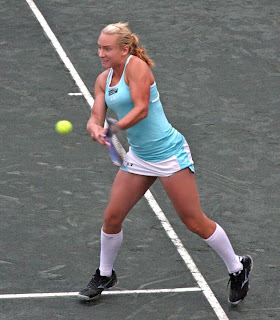 "They are a little faster due to how well they are packed down and the upkeep of them. The clay is also a little easier on my body. Don't ask me how, most people have injuries pop up on the clay where as they are able to stay together on the hard court. I guess I am not a great example since I rolled my ankle in qualies, but I still like my game on clay."

The probability is high that Mattek-Sands and Yan will play Italian Fed Cup standouts Sara Errani and Roberta Vinci in the next round, and Mattek-Sands feels good about the match-up: "They are two good players and have done well as a team, but Yan Zi and I have been playing well this year and are tough too. If we come out and play at the level we should play at I am confident we can win that match. I don't ever set expectations for a match. It is to hard to live up to them sometimes, but as long as I give it all I have that day that is all I can do. Doubles is a team effort, and if you are on that day and your partner is not it can be difficult to get the win. You don't always have to be the best, you just have to get your opponent to play worse than you do that day if you are not playing at your normal level."

Mattek-Sands has no ambivalence about the proposal to move the French Open away from Roland Garros. "Move as soon as possible!! It is a great venue and has a great amount of tradition, but there are just so many people in such a small space that it can become overwhelming when you are trying to get to practice and or a match. It is great that there is so much support for tennis here in France, but change the site and then you could have even more people come. It is sold out everyday which is great, but if you made it a larger venue they would still sell it out."

She also confirms that--despite France being a fashion capital--the crowd did not embrace Venus Williams' first round French Open outfit. Mattek-Sands, not surprisingly, likes the outfit a lot. "Tennis is so stale," she maintains, "when it comes to the clothing and or patterns, although Nike has stepped it up over the last year with some of the new women's outfits. Other than that, tennis is boring when it comes to fashion. I have taken some heat over the years for my outfits, but all I can say is that I am original!"

In the past, when Mattek-Sands has played at the French Open, she has had a chance to walk around Paris, but this year--so far--she hasn't been able to venture out the confines of the stadium. "As for the touristy spots, I have seen them all a few times so I am not as eager to go back. I would like to get out to Versailles and see the palace and gardens as I hear they are incredible. The days are just so long that you do not get home until late and the last thing that you want to do is walk around all day at a museum if you have time off."

Mattek-Sands' next opponent in singles will be 18th seed Shahar Peer. Peer is 3-0 against Mattek-Sands, but this will be the first time that they play one another on a clay court.

(Photo courtesy of Daniel Ward)
Posted by Diane at 10:51 AM

Hi Diane. I would disagree with Bethanie's assertion that the French crowd do not like Venus' outfit. The 3 matches that Venus has played so far she has been greeted with rousing applause and wolf whistles as soon as she takes off the top. For me that means, wow, girlfriend is looking good.

Hmm, I am afraid that in european tradition, in most countries, when you whistle at someone (especially girl) that the sign of disaprovement or very vulgar reaction...