Stosur upset by Dulko in 3rd round of French Open

Before the French Open began, I mentioned that three dangerous floaters--Lucie Safarova, Maria Jose Martinez Sanchez and Gisela Dulko--were all placed in the same quarter of the draw. Safarova and Martinez Sanchez are now out, but Dulko--playing the game she "should be" capable of playing all the time (but she lacks consistency, especially with her serve) proved today to be as dangerous as they come. Dulko upset 8th seed and 2010 runner-up Sam Stosur 6-4, 1-6, 6-3.

Stosur saved seven set points in the first set. In the second, she advanced to a quick 3-0 lead, and proceeded to serve her way to a set victory in just 31 minutes. In the third set, Dulko wisely attacked Stosur's backhand over and over. Dulko broke at 2-all, got her own service game on track, and then controlled the rest of the match, holding at love for a 5-2 lead, then winning on her last service game. 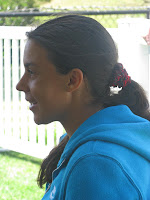 Dulko will play 11th seed Marion Bartoli in the round of 16. Bartoli defeated Julia Goerges in three sets. The Frenchwoman's physical stamina is always in question, but so far, she has come through, and she says she feels great.

Dare we dream of glory ?

It will be painful for me, whoever loses that 4th round. If JJ can keep that serve going, who knows?