Lepchenko upsets Pennetta in 1st round of French Open 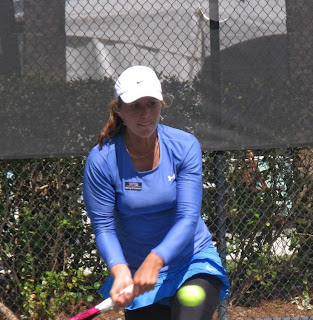 Flavia Pennetta hasn't had such a good season. A serious shoulder injury took her out of Italy's Fed Cup semifinal, which Italy lost. She's been trying to make her way back, but her performance today at the French Open was filled with uncertainty, and--as hard as she fought--the talented Italian just made too many mistakes against an in-form Varvara Lepchenko (who's having her best season ever). During the match, I kept returning to my idea that, during times like these, someone should put Pennetta into a trance and give her the suggestion that she's actually playing in a Fed Cup match. Pennetta looked sad and puzzled during parts of the third set. She saved four match points, but on the fifth, Lepchenko took the match 6-3, 2-6, 6-3.

Pennetta, the tournament's 18th seed, was not the only player to be upset in the opening round. 19th seed Shahar Peer, not surprisingly, was defeated 7-6, 6-1 by Maria Jose Martinez Sanchez.

Bethanie Mattek-Sands fought back from a first set loss to defeat Arantxa Parra Santonja, and Stuttgart champion Julia Goerges defeated Mathilde Johansson in straight sets, though the second set was rather messy.
Posted by Diane at 2:33 PM

Lepchenko played better when I watched her last week, but a big win today nonetheless. Poor Flavia, her ranking is going to drop like a stone after this defeat.
Only saw the first set of Peer v MJMS before moving swiftly over to Llenglen. Alona Bondarenko: also out of sorts returning from injury, made it a easy first round win for JJ.

So, I don't actually believe this will work.